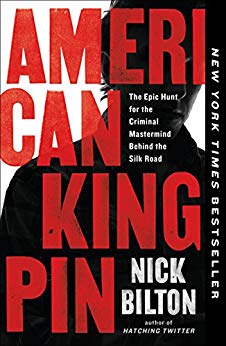 Awesome book on the founder of the Silk Road and the story of how he got caught. While I knew the outcome, following the investigators and Ross Ulbrict in parallel made this a nail-biter – couldn’t stop listening to this one (listened on Audible).

…it cystalized for Julia that Ross really, really didn’t have much money and really, really didn’t care for the objects most people lust after in life. “Wait, why do you live down here?” she asked as they lay on the bed, Ross trying to pick up where they had left off on the couch. He paused to explain, he liked to live economically to prove to himself that he could. “Why pay for an apartment when you could live in this mildew-ridden castle for free?”

Inside these trays were hundreds of tiny shoots, sprouting into the air. From a few feet away, they looked like platters full of porcupines. She moved closer, now peering directly into one of the white trays and was astonished at the sheet number of brown and white mushroom stems. These were not normal mushrooms – she knew perfectly well that they were magic.

By himself, he had essentially done the work of a twelve person startup acting as the front-end programmer, back-end developer, database guy, Tor consultant, Bitcoin analyst, project manager, guerrilla marketing strategist, CEO and lead investor…It would’ve cost more than a million dollars worth of people’s time to replicate the site.

“The site was clearly run by some sort of genius, who seemed to understand technology and politics as much as he understood his audience. And whoever that prodigy was, he or she had to be stopped before this site became a movement and ultimately unstoppable.” As Jared spoke, the totality of what he was saying hit the attorney with utmost fear.

His calculations predicted that, at the current growth rate, sales would be up to one million dollars a week by April – just a month from now. And double that by mid-summer. He told Ross that in a worst-case scenario, 2012 would be a one hundred million dollar year for the site.

It had been difficult hiding the truth. Friends in the real world would say things like, “Why don’t you try this business idea or work on that app?” to which Ross would simply say, “good idea, dude, I’ll think about it.” But, as he told his employees on the site, he just wanted to scream at them, “because I’m running a God damn multi-million dollar criminal enterprise!” Lying came at a price. To separate those to worlds and to justify the actions he had to make in each, telling stories to his family and friends in one and making resolute decisions with vast repercussions in other, the man in the pink and green checkered shirt had become incredibly adept at separating the life of Ross Ulbrict from the life of Dread Pirate Roberts.

He needed an arsenal of hit-men and muscle if someone else was arrested or tried to squeal to the feebs. But most important, Ross needed to find someone inside the government who would be able to keep him apprised of what the Feds knew.

Gary explain that Ross Ulbrict had signed up for an account on Stack Overflow with his real email as his username, but a minute after asking a question on the site, he changed the username to ‘Frosty’…”Because,” Chris said, taking a deep breath. “When we got the server from Iceland,” he took another breath, “we saw that the server and the computer that belonged to the Dread Pirate Roberts were both called Frosty.” The phone line was dead silent.

When he wrote in his diary that he had loaned a dealer half a million dollars, or had Variety Jones deploy one of his soldiers to deal with another problem, or paid hackers or informants one hundred thousand dollars a piece, it was just a day in the office for Ross. Murders, extortion, reprisals and attacks had all just become the job. Sure, it was stressful at times, but in Ross’s alternate universe he was king.

And then Ross stood up and spoke himself. “One of the things I have realized about the law is that the laws of nature are much like the laws of man. Gravity doesn’t care if you agree with it – if you jump off a cliff, you are still going to get hurt.” He ended with a heartfelt apology.

In the video, Ross is talking to his old friend from high school, Rene, about their future outlook on life. The video is slightly out of focus and while the two friends seem to be in the same conversation, it appears that Ross is talking about someone else. “Do you think you’re going to live forever?” Rene asks. There is a brief, contemplative pause. Then Ross Ulbrict looks at the camera and answers, “I think it’s a possibility. I honestly do. I think I might live forever in some form.”