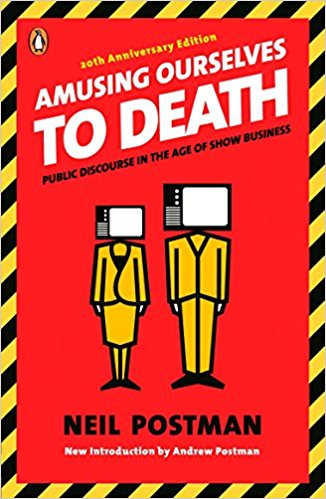 Amusing Ourselves to Death

Neil makes a strong argument for the value of reading and print media over television. Written about television, but even more applicable as the internet, mobile and social media have become so popular and ingrained in our lives. The overall theme that form influences content and TV is designed for entertainment is reinforcing my thesis that most technologies today aren’t leading towards good, intellectual discussion but rather towards entertainment.

“Although the Constitution makes no mention of it, it would appear that fat people are now effectively excluded from running for high political office. Probably bald people as well. Almost certainly those who looks are not significantly enhanced by the cosmetician’s art”

“The information, the content, or, if you will, the “stuff” that makes up what is called “the news of the day” did not exist – could not exist – in a world that lacked the media to give it expression…This idea – that there is a content called “the news of the day” – was entirely created by the telegraph (and since amplified by newer media), which made it possible to move decontextualized information over vast spaces at incredible speed.”

If we have tools to measure something, we will believe in the content:

[Lewis Mumford] “‘The clock,’ Mumford has concluded, ‘ is a piece of power machinery whose ‘product’ is seconds and minutes.’…Moment to moment, it turns out, is not God’s conception, or nature’s. It is man conversing with himself about and through a piece of machinery he created.”

“And so, I raise no objection to television’s junk. The best things on television are its junk, and no one and nothing is seriously threatened by it…Therein is our problem, for television is at its most trivial and, therefore, most dangerous when its aspirations are high, when it presents itself as a carrier of important cultural conversations.”

“Judges, lawyers and defendants do not regard proverbs or sayings as a relevant response to legal disputes…On the one hand, there is a residual belief in the power of speech, and speech alone, to carry the truth; on the other hand, there is a much stronger belief in the authenticity of writing and, in particular, printing…In our culture, lawyers do not need to be wise; they need to be well briefed.”

“…Why do you assume the accuracy of a print-referenced citation but not a speech-referenced one? The answer he received took the following line: you are mistaken in believing that the form in which an idea is conveyed is irrelevant to its truth…The written word is assumed to have been reflected upon and revised by its author, reviewed by authorities and editors. It is easier to verify or refute”

“Truth, like time itself, is a product of a conversation man has with himself about and through the techniques of communication he invented.”

More applied to social media and the internet: “We are now a culture whose information, ideas and epistemology are given form by  television, not by the printed word.”

“…Thomas Paine’s Common Sense, published on January 10, 1776, sold more than 100,00 copies by March of the same year, In 1985, a book would have to sell eight million copies (in two months) to match the proportion of the population Paine’s book attracted.”

“In 1786, Benjamin Franklin observed that Americans were so busy reading newspapers and pamphlets that they scarcely had time for books…Alexis de Tocqueville took not of this fact in his Democracy in America, published in 1835: “In America,” he wrote, “parties do not write books to combat each other’s opinions, but pamphlets, which are circulated for a day with incredible rapidity and then expire.””

“The influence of the printed word…was insistent…because of its monopoly…But from the seventeenth century to the late nineteenth century, printed matter was virtually all that was available. There were no movies to see, radio to hear, photographic displays to look at, records to play. There was no television.”

“For example, on October 16, 1854, in Peoria, Illinois, Douglas delivered a three-hour address to which Lincoln, by agreement, was to respond. When Lincoln’s turn came, he reminded the audience that it was already 5 p.m., that he would probably require as much time as Douglas and that Douglas was still scheduled for a rebuttal. He proposed, therefore, that the audience go home, have dinner, and return refreshed for four more hours of talk. The audience amiably agreed, and matters proceeded as Lincoln had outlined.”

“At the debated in Ottowa, Douglas responded to lengthy applause with a remarkable and revealing statement. “My friends,” he said, “silence will be more acceptable to me in the discussion of these questions that applause. I desire to address myself to your judgement, your understanding, and your consciences, and not to your passions or your enthusiasms.””

“Public figures were known largely by their written words, for example, not by their looks or even their oratory. It is quite likely that most of the first fifteen presidents of the United States would not have been recognized had they passed the average citizen in the street…To think about those men was to think about what they had written, to judge them by their public positions, their arguments, their knowledge as codified in the printed word.”

“…telegraphy gave a form of legitimacy to the idea of context-free information; that is, to the idea that the value of information need not be tied to any function it might serve in social and political decision-making and action, but may attach merely to its novelty, interest and curiosity.”

“A book is an attempt to make thought permanent and to contribute to the great conversation conducted by authors of the past. Therefore, civilized people everywhere consider the burning of a book a vile form on anti-intellectualism. But the telegraph demands that we burns its contents. The value of telegraphy is undermined by applying the tests of permanence, continuity or coherence…Facts push others facts into and then out of consciousness at speeds that neither permit nor require evaluation.”

“The crossword puzzle is one such pseudo-context; the cocktail party is another; the radio quiz shows of the 1930’s and 1940’s and the modern television game show are still others…In one form or another, each of these supplies an answer to the question, “What am I do to with all these disconnected facts?””

“A myth is a way of thinking so deeply embedded in our consciousness that it is invisible. This is now the way of television. We are no longer fascinated or perplexed by its machinery.”

“But what I am claiming here is not that television is entertaining but that it has made entertainment itself the natural format for the representation of all experience.”

“That is why even on news shows which provide us daily with fragments of tragedy and barbarism, we are urged by the newscasters to “join them tomorrow.” What for? One would think that several minutes of murder and mayhem would suffice as material for a month of sleepless nights.”

“As typography once dictated the style of conducting politics, religion, business, education, law and other social matters, television now takes command. In courtrooms, classrooms, operating rooms, board rooms, churches and even airplanes, Americans no longer talk to each other, they entertain each other. They do not exchange ideas; they exchange images.”

[In regards to Presidential debates] “Each candidate was given five minutes to address such questions as, What is (or would be) your policy in Central America? His opposite number was then given one minute for a rebuttal. In such circumstances, complexity, documentation and logic can play no role, and indeed, on several occasions syntax itself was abandoned entirely.”

“The credibility of the teller is the ultimate test of the truth of a proposition. “Credibility” here does not refer to the past record of the teller for making statements that have survived the rigors of reality-testing. It refers only to the impression of sincerity, authenticity, vulnerability or attractiveness (choose one or more) conveyed by the actor/reporter.”

“Imagine what you would think of me, and this book, if I were to pause here, tell you that I will return to my discussion in a moment, and then proceed to write a few words in behalf of United Airlines or the Chase Manhattan Bank. You would rightly think that I have no respect for you and, certainly, no respect for the subject.”

“And now, I put these questions to you: Would it be an exaggeration to say that not one American in a hundred knows what languages the Iranians speak? Or what the word “Ayatollah” means or implies? Or knows any details of the tenets of Iranian religious beliefs? Or the main outlines of their political history? Or knows who the Shah was and where he came from?….But these are opinions of a quite different order from eighteenth- or nineteenth-century opinions. It is probably more accurate to call them emotions rather than opinions, which would account for the fact that they change from week to week, as the pollsters tell us.  What is happening here is that television is altering the meaning of “being informed” by creating a species of information that might properly be called disinformation.”

“Its principal theorists, even its most prosperous practitioners, believed capitalism to be based on the idea that both buyer and seller are sufficiently mature, well informed and reasonable to engage in transactions of mutual self-interest.”

“By substituting images for claims, the pictorial commercial made emotional appeal, not tests of truth, the basic of consumer decisions.”

“Moreover, commercials have the advantage of vivid visual symbols through which we may easily learn the lessons being taught. Among those lessons are that short and simple messages are preferable to long and complex ones; that drama is to be preferred over exposition; that being sold solutions is better than being confronted with questions about problems…For example, a person who has seen one million television commercials might well believe that all political problems have fast solutions through simple measures – or ought to.”

“To put it plainly, a student’s freedom to read is not seriously injured by someone’s banning a book on Long Island or in Anaheim or anyplace else. But as [George] Gerbner suggests, television clearly does impair the student’s freedom to read, and it does so with innocent hands, so to speak. Television does not ban books, it simply displaces them.”

“George Comstock and his associates have reviewed 2,800 studies on the general topic of television’s influence on behavior, including cognitive processing, and are unable to point to persuasive evidence that ‘learning increases when information is presented in a dramatic setting.'”

[Reinforcing my case for taking notes on books, articles and ideas] “Stern reported that 51 percent of viewers could not recall a single item of news a few minutes after viewing a news program on television. Wilson found that the average television viewer could retain only 20 percent of the information contained in a fictional news story. Katz et al. found that 21 percent of television viewers could not recall any news items within one hour of broadcast.”

“But that if there are no cries of anguish to be heard? Who is prepared to take arms against a sea of amusements? To whom do we complain, and when, and in what tone of voice, when a serious discourse dissolves into giggles? What is the antidote to a culture’s being drained by laughter?”

“Television, as I have implied earlier, serves us most usefully when presenting junk entertainment; It serves us most ill when it co-opts serious  modes of discourse – news, politics, science, education, commerce, religion – and turns them into entertainment packages. We would all be better off if television got worse, not better.”