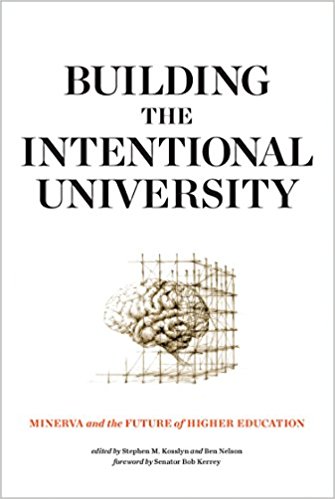 Minerva is one of the coolest ideas I have ever come across, and has me thinking that real change in higher education is possible. The founders of Minerva took a top-down look at all of the problems and issues with higher education and all the research on learning and turned it into arguably the best thought-out university in the world. This book outlines that process and the vision for Minerva.

The thing that struck me most about this book was how well thought-out the entire system of Minerva is. The book explains each step of why Ben and Stephen created Minervia in the manner that they did. Universities obviously are extremely complicated entities, and every single justification for a change from the old system has a backing in either empirical research. This book opened my mind to the flaws of large, educational institutions more than any other book and gave me hope for change.

The book starts off by explaining why we need to change. Basically all universities claim to teach “critical thinking” or want student to “become global citizens,” but rarely do universities actually explain how to do that, much less design their systems around it.

Minerva aims to teach students practical knowledge which is knowledge they can use for an ever-changing world. They broke them down into four core competencies: thinking critically, thinking creatively, communicating effectively and interacting effectively.

From there, they aimed to break it down further into production systems which consist of a condition/action pair. (For example, a production might say “If it’s raining, get an umbrella”). He breaks it down further to say there are two kinds of production systems: habits of mind and foundational concepts (together shorthand as HCs). Habits of mind are easily recognizable conditions with harder actions (“Tailor oral and written work for the audience,” is easy to identify but harder to complete). In contrast, foundational concepts are not hard to implement, but hard to identify (correlation vs causation). Minerva then attaches a number of these in each course, and also deliberately tries to teach far reach to be able to apply them to many scenarios.

They structured majors and curriculum with three main goals in mind: content should not be the focus, the curriculum must be structured, courses should be seminal, and students need information and guidance to make wise choices. With that in mind, students follow the following 4-year track:

The middle part of the book was the slowest, and concerned how the teachers teach. A few highlights:

The admissions process is different: they try extremely hard to make sure they don’t favor wealth. They do this by doing the following:

Their campus is not really a campus, students travel between 7 cities over the course of their college career: San Francisco, Berlin, Hyderabad, Seoul, Buenos Aries, London and Taipei. They have specific activates designed to help students engage with each city, including working with location education, business or community-based organizations to help solve problems. Some include deliverables at the end, while others are more brainstorming based. In addition, students are expected to create experiences: for example, in Berlin students took a day and explored the food of the city.

One thing he describes in detail is the accreditation process and how that relates to prestige. Most regional accreditation organizations require the university to have graduated students before being accredited, which is obviously an issue if you want to be selected. They were able to partner with the Keck Graduate Institute to get around this, because KGI was already accredited and also didn’t already have an undergrad program.

“96% of chief academic officers….say that their institution is “very or somewhat” effective at preparing students for the world of work. The same study found that a mere 14% of Americans strongly agree that college graduates are well prepared to achieve success in the workplace”