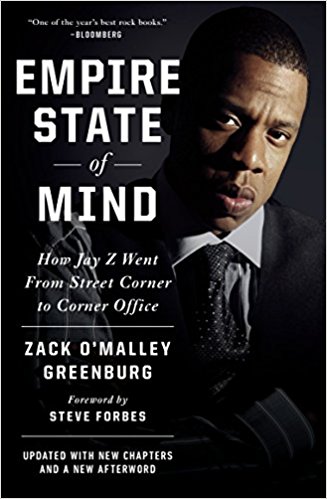 Nice read if you’re interested in Jay Z or the rap world. Unfortunately, Greenburg never actually interviews Jay himself, but cool to see the life story and mentality of one of the best.

“What’s in it for us?” That basically set the tone for the rest of the meeting. If Jay Z wasn’t going to benefit financially, he wasn’t interested in having a book written about him by anybody, even somebody whose Forbes articles he’d referenced in at least three different songs.

Lawrence played the track, Jay Z began mumbling along to it, then picked up a pen and a notebook and seemed to start scribbling notes. He placed the pad on the sofa and started pacing back and forth, muttering more half-formed words. After 5 minutes he glanced once more at the notepad and told Lawrence he was ready. While Jay Z was in the sound booth recording his verse, Lawrence went over to see what he’d written in the notebook, which was still sitting on the couch. “I looked at the pad and there’s fucking nothing on it,” Lawrence recalls. “He was doing it as a fucking joke, like just to show people. That was when I was like ‘this guy is the best rapper.’”

Roc-A-Fella records soon expanded beyond music, thanks to two of Dash’s guiding principles. “We shouldn’t let other people make money off us, and we shouldn’t give free advertising with our lifestyle.” Dash wasn’t saying that Jay Z and other Roc-A-Fella artists should stop rapping about designer clothes and high-end liquor, rather they should be compensated for the endorsements (or create their own brands.

[By bringing Notorious B.I.G. and Jay together] "Electrified by the challenge, Jay Z went back into the booth and re-recorded his verses, leaving empty spaces in between for Biggie to record his, almost practically to a different song,” Kent remembers. "He puts his breaks where they go and he says his verses where they are and the spaces are there. So Big’s like, ‘I can’t fuck with it right now. I need to go home with that.’ So he had to take it home to fill in the blanks, and he saw Jay do it without a pen. And the funny part is, everybody thinks that Big never wrote his rhymes down, and that wasn’t the case. He did, until he saw Jay do that."

[About Jay Z’s 2003 basketball team competing in Rucker Park] Fab’s tapes contain hours upon hours of footage, from candid interactions between Jay Z and his players to shots of some of the best basketball ever to grace the Rucker. Yet they remain filed away, destined to fall short of the big screen. “Who knows, I could’ve run the festivals,” says Fab. “That was the pinnacle of the Rucker, in that period. It got so big and that was kind of the crescendo tournament.” So after a whole summer of meticulously organizing one of the best teams ever to set foot in New York’s famous court this side of Madion Square Garden, why would Jay Z scuttle the documentary that was going to pull it all together? The answer is simple: he didn’t win. [Backstory: the championship game ended up on the famous power outage in the Northeast and Jay Z couldn’t get any of the star players to the game, which is why they lost]

[About Jay Z’s later career] Though the song contains more high-end automobile advertisements than the latest issue of Robb Report. It’s clear that Jay Z’s desire to be seen as a legitimate businessman trumps his need to be a big spender, though the former certainly doesn’t cancel the latter. Still, for a rap video the shift from simply flaunting wealth to flaunting wealth and explaining how it might be generated is an unusual, if not revolutionary, departure.

[Jay Z is connected to champagne Armand de Brignac, although not in a direct, public way. He keeps his financial interests secret in this endeavor as to not become a simple brand promotor]

The connection between Jay Z and the Nets began with a half-serious suggestion from star point guard Jason Kidd in 2003. Kidd was hosting a birthday party at Jay Z’s 40-40 club and joked that the rapper ought to buy a stake in the Nets. The idea intrigued Jay Z and that fall he met with real estate developer Bruce Ratner, one of four bidders attempting to buy the team. Unlike the other bidders, Ratner’s goal was ultimately to move the team to Brooklyn, where he would erect a sparkling new arena and surround it with high-rise commercial and residential towers.