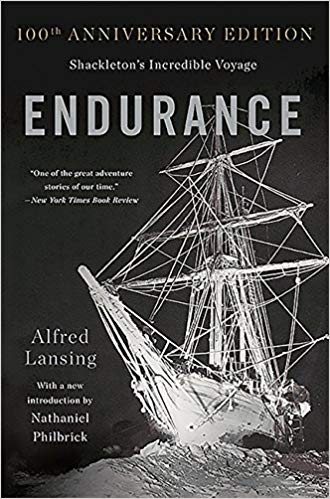 Very good book about an incredible journey. If you aren’t already familiar with Shakleton, this is a great way to understand his incredible story. It almost seems like it was made up based on how much adversity these men faced.

And it was typical of Shakleton: purposeful, bold, and neat. He had not the slightest doubt that the expedition would achieve its’ goal. The whole undertaking was criticized in some circles as being too audacious, and perhaps it was. But if it hadn’t been audacious, it wouldn’t have been to Shakleton’s liking. He was, above all, an explorer in the classic mold: utterly self-reliant, romantic, and just a little swash-buckling.

Nor did the Antarctic represent to Shakleton merely the grubby means to a financial end. In a very real sense, he needed it. Something so enormous, so demanding that it provided a touchstone for his monstrous ego and implacable drive.

In all the world, there is no desolation more complete than the polar night. It is a return to the ice age: no warmth, no life, no movement. Only those who have experienced it can fully appreciate what it means to be without the sun day after day and week after week…and it has driven some men mad.

[After the boat sank] “And so they were alone. Now, in every direction, there was nothing to be seen but the endless ice.”

Each dog in turn was taken off his trace and led behind a row of large ice hammocks. There, Wild sat the dog in the snow, took the muzzle in his left hand, and placed his revolver close to it’s head. Death was instantaneous.

Since one of the items they had been forced to deal without since abandoning the Endurance was toilet paper, they had to substitute the only disposable material at hand: ice.

Macklin: “One looks forward to meals, not for what one will get, but as definite breaks in the day. All around us we have day after day the same broken whiteness, unrelieved by anything at all.”

Shackleton estimated it to be 4 below zero. They could even hear the water freezing…The clothes the men wore, now that they were sitting almost motionless, froze stiff. Not only were their garments wet from the spray and the snow, they were also worn and saturated with the oil secreted from the men’s own bodies during 6 months of constant wear. If a man shifted his position even slightly, his skin came in contact with a new, unwarmed surface of his clothing.

And though the Caird’s chances of actually reaching South Georgia were remote, a great many men genuinely wanted to be taken along. The prospect of staying behind, of waiting and not knowing. Of possibly wintering on this hateful island was far from attractive. Shackleton had already made up his mind after long discussions with Wild, not only as to who should be taken, but who should not be left behind.

[Shackleton in regards to splitting the party up and he and 5 men going to find South Georgia] “As for the journey itself, he seemed strangely doubtful, and he asked Worsely’s opinion of their chances. Worsely replied that he was sure they would make it, but Shackleton was far from convinced. The truth was that he felt rather out of his element. He had proved himself on land. He had demonstrated there above all doubt, his ability to pit his matchless tenacity against the elements and win. But the sea is a different sort of enemy. Unlike the land where the courage and simple will to endure would often see a man through, the struggle against the sea is an act of physical combat, and there is no escape. It is a battle against a tireless enemy in which man never actually wins. The most that he can hope for is not to be defeated.”

Worsely thought not so much of dying, because that was now so plainly inevitable, but of the fact that no one would ever know how terribly close they had come.

[About crossing South Georgia island by land] “In short, it was impassable. Shackleton knew it. And yet, there was no choice.”

Of the honors that followed, and there were many, possibly none ever exceeded that night of May the 22nd, 1916, when in a dingy warehouse shack on South Georgia, with the smell of rotting whale carcasses in air, the whalermen of the southern ocean stepped forward, one by one, and silently shook hands with Shackleton, Worsely and Crean.