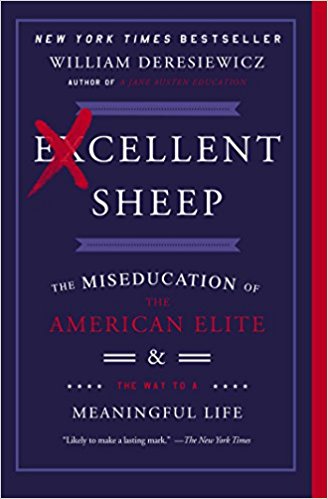 A good overall primer for what is wrong with much of elite higher education, Excellent Sheep is about the problems with the current education system, especially with elite, private schools. His book is an argument that the entire system is forcing high-achieving students to check as many boxes and not think about what they actually want. This leads to students living their lives less for themselves (and often not happy); instead just pushing through to get better grades, more extracurricular activities, etc. Building the Intentional University summed up the problems (and offered a solution) in a slightly better way, but both are worth a read.

Many students play this game of getting good grades and checking boxes but many of them end up unhappy in their jobs, yet continue along the path despite this.

Top-tier institutions are designed more like businesses than schools; they give students what they want instead of what they need (which, out of any subset of the population, is most critical for college students).

Deresiewicz encourages people to try different things, making sure they take time off to do something unproductive. Reading or traveling or something that you can’t put on a resume is best for people to understand what they actually want to do. Another concept he touches on is taking risks and being willing to fail. College is part of life and people will be much more satisfied if they do that compared to living someone else’s ideal life. Education should be a coming-of-age, figuring out who you are and what the point of life is, not to get a specific job.

The elite colleges are now filled with wealthy children who have checked the boxes, instead of “geeks” and “weirdos” who are actually making waves and thinking about the hard questions

The requirements for students today is higher than it has ever been, combining the requirements from different time periods. Not only do we want strong academics, but also to be “clubbable” (essays and letters of recommendation). We want them to be athletic, but not ‘athletes”, so some involvement in sports is looked favorable (especially sports like row and fencing). We want them to do service, and to be leaders (not just involved in organizations but in charge of them).

Economics has become the most popular major at most elite schools, and banking/consulting the career path most people go into (despite few of them saying that when they come in). Students are finding that they can’t do whatever they want, but rather are pressured into high paying careers or graduate degrees in medicine or law.

“If you’re kid got into a prestigious college, it’s if you, as a parent, got an “A””

The drug of praise is instilled into students’ minds from a young age, and contributes to them constantly trying to get A’s, lead clubs, get into the next best thing (colleges, grad schools, top Wall St firms, etc.).

The admissions process has changed over time. At the beginning, there were very small classes that focused almost entirely on academics. As the top schools got larger, they wanted a more “well rounded man” and introduced things like extracurriculars (this is about the time football was invented). Later on, more distinct features were required like background information and consideration for legacies and athletes, mostly out of anti-Semitic ideas. Then, academics came back to the forefront, while keeping some things like legacies and athletes. This turned into the hardest time for current students who are not only trying to be as well-rounded as early college men, but also academic like later ones (1960s and after).

Education shouldn’t just be skill acquisition, but instead should help you ask what you want to do in life and what the purpose of it is.

Higher education produces what sells. Large campuses, good marketing, whatever students want. The most interesting part is that education needs to be a system where the consumers fundamentally don’t know what they want, that’s what’s important and unique to getting a good education

Great teaching isn’t scalable; yet universities make teaching as efficient as possible, putting together large lecture groups and removing individual student-teacher interaction with all of the TAs and post-docs helping out

US News Ranking is one of the worst contributors to problems with the system. So many students make decisions based on whatever school is higher in the ranking. However, many things are flawed in the ranking:

The customer service mentality is also responsible for the profusion of swanky, new dorms, gyms and student centers. A building boom, like many others in the 1990’s and early 2000’s, was financed by debt, and that has been a major factor in tuition growth.

Colleges now sell themselves to kids in terms of what they can give them, not what they play to expect of them.

It’s not as if our student are clamoring to get into classes on Milton or Kant. The dreaded English major is now the choice of all of 3%. Business, at 21%, accounts for more than half again as many majors as all of the Arts and Humanities combined.

The things that are most worth doing are worth doing for their own sake. Anyone who tells you that the sole purpose of education is the acquisition of negotiable skills is attempting to reduce you to a productive employee at work, a gullible consumer in the market and a docile subject of the state.

Self-knowledge is the most practical thing in the world because it helps you find your way to a career that’s right for you.

However high you climb, there is always someone above you…People arrive at Yale thinking they’ve arrived, only to realize there are other places to arrive at.

Learning for its own sake means exactly what it says: learning is the only reason that you’re doing it, because learning is what matters. Wanting to be at the top involves a rather different set of motivations, and you need to look that in the face.

Note the adjectives: commonplace, ordinary, usual, common. There is nothing distinguished about this person. Around the 15th time I read that paragraph, I realized that it was a perfect description of the kind of person who prospers in a bureaucratic environment…That is the great question of bureaucracies: why are the best people so often mired in the middle, while non-entities become the leaders? Because what gets you up the ladder isn’t excellence, it is a talent for maneuvering.

“…in an energetic and up-beat way, shares the values of everyone. When people say leaders today, what they mean is gung-ho followers.”

Books are maps of possible futures. They help endow you with exactly that imagination that it takes to invent your life.

The perspectives you get from studying the general, the wisdom to come out and say the word, are meant to interpenetrate the practice of your specialty.

A teacher’s job is to lead-forth the powers that lie asleep within her students.

One study found that 100 high schools, about 0.3% of the nationwide total, account for 22% of students at Harvard, Yale and Princeton…the feeder system is alive and well.

The amount of students who are intellectually restless or outright brilliant is falling at these schools for the straight-A types. Admissions offices don’t want to take the chance.

We all believe, or claim to believe, in social mobility. But we also all know, in our heart of hearts, that social mobility is a zero-sum game. For every person who climbs up the income distribution, someone else falls down.