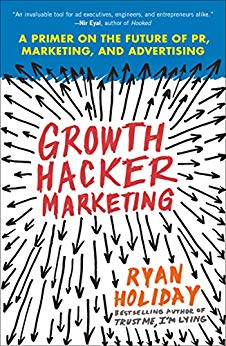 Great overview for someone who doesn’t know the term “growth marketing.” He gave examples of how the best companies grow: it’s not an accident! Since I’ve read quite a bit about growth marketing online (Andrew Chen and others), this wasn’t as helpful for me.

It was only a matter of time before someone smart came along and said, “It doesn’t have to be this way. The tools of the internet and social media have made it possible to track, test, iterate, and improve marketing to the point where these enormous gambles are not only unnecessary, but insanely counterproductive.” That person was the first growth hacker, whether they knew it or not.

“So put ‘P.S.: I love you. Get your free e-mail at Hotmail’ at the bottom.” — This little feature changed everything. It meant every email that Hotmail’s users sent would be an advertisement for the product.

First Google built a superior product. Then it built excitement by making it invite-only. And by steadily increasing the number of invites allowed to its existing user base, Gmail spread from person to person until it became the most popular, and in many ways the best, free email service.

A growth hacker is someone who has thrown out the playbook of traditional marketing and replaced it with only what is testable, trackable, and scalable. Their tools are emails, data targeting, blogs, and platform APIs instead of commercials, publicity, and money.

This is also closer to the reality most of us live in, although in truth, whether it’s a Kickstarter project seeking funding, or a new app that needs to get traction, or a department manager at a twenty-thousand-person company launching a new line of products, the thinking is the same: how do you get, maintain, and multiply attention in a scalable and efficient way?

You know what the single worst marketing decision you can make is? Starting with a product nobody wants or nobody needs. Yet if we are honest, this is exactly the compelling proposition most businesses decide to go out into the world with.

Optimizing a product to spread and be well received by customers, by the media, and by influencers is something that you, as a marketer or a growth hacker, are uniquely qualified to do. You are, in effect, the translator who helps bridge the producers and the consumers so they are in alignment.

As Evernote’s founder, Phil Libin, told a group of entrepreneurs in a now-classic talk, “People [who are] thinking about things other than making the best product, never make the best product.” So Evernote took “marketing” off the table and instead poured that budget into product development. This undoubtedly slowed growth in some sense but in the long run encouraged incredible growth. Because Evernote is far and away the most superior productivity and note-taking application on the planet. Today, it practically markets itself.

The important question at a launch is not “How can we reach as many people as possible?” It is “Who are our early adopters and where can we find them?”

(A very common question: where do I find the right people? If this isn’t immediately obvious to you, then you don’t know your own industry well enough to even consider launching a product yet. Period.)

As Sean Ellis, one of the first growth hackers—he coined the term with Patrick Vlaskovits—puts it: “Focusing on customer acquisition over ‘awareness’ takes discipline. . . . At a certain scale, awareness/brand building makes sense. But for the first year or two it’s a total waste of money.”

To make that clear: you should not just encourage sharing but create powerful incentives to do so. If your product isn’t doing that right now, why would anyone share it? But if you do it right, people will advertise your product and feel like they are the ones getting something out of it!

Think of Apple and BlackBerry, which turned their devices into advertising engines by adding “Sent from my iPhone” or “Sent from my BlackBerry” to every message sent. The question is, what’s your version of that?

Virality is not an accident. It is engineered.

Yes, it’s more seductive to chase new marketing initiatives. Yes, it would be more fun to get some press. But it’s usually better for business to retain and optimize what we already have.

It’s inevitable that your growth channels are going to get less effective over time, particularly as others catch on to what you’re doing. There will be diminishing returns, too, even to retention efforts. So it’s important that the growth hacker is looking at their data to learn when it’s time to try something new, when to try the next round of experiments and new growth hacks.

If something as old school as publishing can be invigorated by the growth hacker approach, what else can? If you can treat a book like a start-up, anything is game.