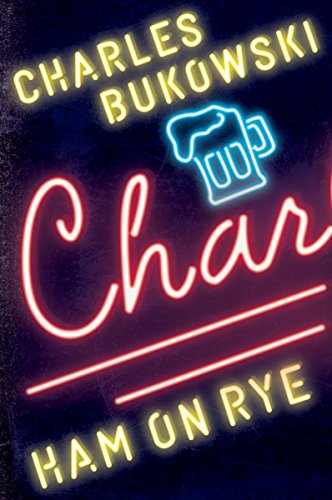 Brutally honest semi-autobiographical coming-of-age story from Charles Bukowski of his alter-ego Henry Chinaski. Disturbing at times (don’t read this if you can’t handle crude language), but it was so honest that it kept me hooked. I appreciated the perspective and also that it was something I wouldn’t normally read.

Red and I were getting better and better. Practice, that’s all it took. All a guy needed was a chance. Somebody was always controlling who got a chance and who didn’t.

They got up and began packing out. “Not you, Henry,” said Mrs. Fretag. I sat in my chair and Mrs. Fretag stood there looking at me. Then she said, “Henry, were you there?” I sat there trying to think of an answer. I couldn’t. I said, “No, I wasn’t there.” She smiled. “That makes it all the more remarkable.” “Yes, ma’am …” “You can leave, Henry.” I got up and walked out. I began my walk home. So, that’s what they wanted: lies. Beautiful lies. That’s what they needed. People were fools. It was going to be easy for me. I looked around. Juan and his buddy were not following me. Things were looking up.

We were the way we were, and we didn’t want to be anything else. We all came from Depression families and most of us were ill-fed, yet we had grown up to be huge and strong. Most of us, I think, got little love from our families, and we didn’t ask for love or kindness from anybody. We were a joke but people were careful not to laugh in front of us. It was as if we had grown up too soon and we were bored with being children. We had no respect for our elders.

I had decided against religion a couple of years back. If it were true, it made fools out of people, or it drew fools. And if it weren’t true, the fools were all the more foolish.

It didn’t pay to trust another human being. Humans didn’t have it, whatever it took.

The Baron went on doing magic things. Half the notebook was filled with Baron Von Himmlen. It made me feel good to write about the Baron. A man needed somebody. There wasn’t anybody around, so you had to make up somebody, make him up to be like a man should be. It wasn’t make-believe or cheating. The other way was make-believe and cheating: living your life without a man like him around.

Words weren’t dull, words were things that could make your mind hum. If you read them and let yourself feel the magic, you could live without pain, with hope, no matter what happened to you.

You can forgive a fool because he only runs in one direction and doesn’t deceive anybody. It’s the deceivers who make you feel bad.

The problem was you had to keep choosing between one evil or another, and no matter what you chose, they sliced a little bit more off you, until there was nothing left. At the age of 25 most people were finished. A whole god-damned nation of assholes driving automobiles, eating, having babies, doing everything in the worst way possible, like voting for the presidential candidate who reminded them most of themselves.

The thought of being something didn’t only appall me, it sickened me. The thought of being a lawyer or a councilman or an engineer, anything like that, seemed impossible to me. To get married, to have children, to get trapped in the family structure. To go someplace to work every day and to return. It was impossible.

“Yeah,” said Jimmy. “I guess the only time most people think about injustice is when it happens to them.”

Drink was the only thing that kept a man from feeling forever stunned and useless. Everything else just kept picking and picking, hacking away. And nothing was interesting, nothing. The people were restrictive and careful, all alike. And I’ve got to live with these fuckers for the rest of my life, I thought.

Never bring a lot of money to where a poor man lives. He can only lose what little he has. On the other hand it is mathematically possible that he might win whatever you bring with you. What you must do, with money and the poor, is never let them get too close to one another.

The whole college scene was soft. They never told you what to expect out there in the real world. They just crammed you with theory and never told you how hard the pavements were. A college education could destroy an individual for life. Books could make you soft. When you put them down, and really went out there, then you needed to know what they never told you.

Education also seemed to be a trap. The little education I had allowed myself had made me more suspicious. What were doctors, lawyers, scientists? They were just men who allowed themselves to be deprived of their freedom to think and act as individuals.