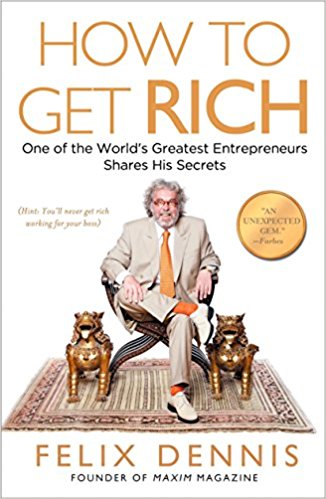 How to Get Rich

Fun book about Felix Dennis’ advice on how to become rich. He estimates his net worth between $400 – 800mm, so he knows what he’s talking about. He has an entertaining, lighthearted prose that is laced with some good wisdom about how to actually build wealth.

“For a start, the salary beings to have an attraction and addictiveness all of its own. A regular paycheck and crack cocaine have that in common. In addition, and more to the point, working too long for other people can blunt your desire to take risks. This last factor is crucial, because the ability to live with and embrace risk is what sets apart the financial winners and losers in the world.”

“Working for others in a reconnaissance expedition; a means and not an end in itself. It is an apprenticeship and not a goal.”

About venture capital: “Experience has shown them that this control, combined with growth at almost any price, is the course most likely to return the profits they need to satisfy their own investors – the great fleas on their back”

“There is absolutely nothing more likely to dampen the prospects of becoming rich than a nice, fat, regular salary check”

“Never yet have I met a self-made rich man or woman whose famility or personal relationships were not plagued by the burden of creating a fortune, even a small fortune. A rocky marriage; lack of time spent with their children; the substitution of expensive gifts to repress guilt created by their frequent absences from home; the concern that their children have grown used to privilege and are consequently slacking in their education or lacking in ambition – all of these come as part and parcel of self-made wealth.”

“Think big, act small. It’s a recipe that never goes out of style. While especially important for start-ups, it will serve you faithfully long after you have established yourself as a serious player. A successful and naturally modest entrepreneur is an object of reverence and respect in the business world. ”

“Talent is usually conscious of its own value. But the currency of that value is not necessarily a million-dollar salary. The opportunity to prove themselves, and sometimes the chance to run the show on a day-to-day basis, will often do the trick just as well.”

“Quitting is not dishonorable. Quitting when you believe you can still succeed is.”

“Without self-belief nothing can be accomplished. With it, nothing is impossible. It is as brutal and as black and white as that. If you take no other memory from this book, then that single thought. It was worth a damn sight more than the price you paid for it.”

“Most people seek job security, job satisfaction and power over others far more than they seek wealth. And thank goodness for that. If all the great managers in the world were dead set on becoming rich, and willing to take the necessary risks to do so, there would be little hope for the likes of you and me.”

On ‘elephants’ (people with capital): “But never forget why he came calling in the first place. He does not love you. He is not your friend, although he may pretend to be. He might not hate you, he may even admire you a little. He will certainly flatter you. But remember he had to come. His fear drove him. His fear of his master, the institutional investor.”

“Ownership isn’t the important thing, it’s the only thing.”

“Nothing else counts in the getting of money. Shareholder thanks do not count. A good salary and a company car and health plan and pension don’t count. Most share options…don”t count. The gratitude of colleagues doesn’t count.”

“Competition is all that makes capitalism bearable.”

“Do not waste your praise on ho-hum performances as a sop…THey seek recognition, not bribery.”

“Why am I a magazine publisher? Is it because I love magazines? No. It’s because I had a tiny success back in 1967 selling a hippie magazine on London’s fashionable King’s Road”

“So what businesses should I have gravitated toward? Computer software, technology and dot com start-ups, cable and satellite television, property, environmental waste clean-up, alternative energy services…any one of those might have created a much larger fortune for me in less time than I took with magazines”