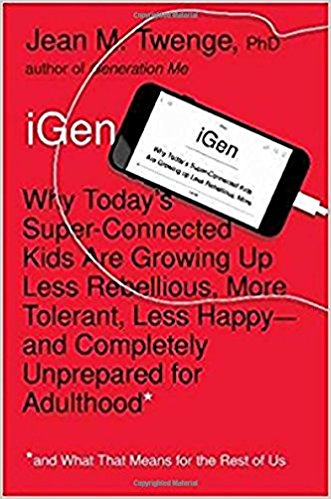 The biggest takeaway I got from this is that iGen’ers are growing up slower in almost every way. With increased screen time and smartphone use playing a large role, iGen’ers are getting driver’s licenses later, drinking alcohol later, having sex later, are more tolerant towards minorities, are more safe, and are much more insecure. . If you spend a decent amount of time on smartphones (IE everyone) this is a perfect meta-analysis of sorts of the early research on smartphone use.

“In short, iGen teens are less likely to take part in every single face-to-face social activity measured across four data sets of three different age groups.” This includes everything from activities with no real aim like cruising in a car to activities with a goal like going to a movie with friends.

“8th graders who spend 10+ hours on social media are 56% more likely to be unhappy.” She also shows a graph that Sports/Exercise, Religious Services, Print Media and In-person Social Interaction all increase happiness (in that order) and Internet, Social Networking Website and Texting all decreased happiness in the same age group.

Individualism was a trend in Millennials that is continuing and growing in iGens.

Another theory: they are unprepared for life due to their lack of independence. Students were asked if parents “supervised my every move,” “stepped in to solve problems for me,” and “didn’t let me figure things out independently.” Those who reported that their parents did these things (called “Helicopter Parents”) had lower psychological well-being scores and also were more likely to develop symptoms of anxiety and depression.

Either way, increased screen time and reduced independence has not been good for the mental health of teens.

Time spent on homework, outside activities (sports, clubs, etc) and TV have remained constant. Print media and sleep have decreased. Screen time on phones has increased a ton.

Religion: half of 13-to-17-year-olds want to pursue a science-related career, yet only 1% of youth pastors say they have addressed any subject related to science in the last year. Religion has to adapt to include science if it wants to survive.

According to a 2012 Pew Research Center survey, 56% of Americans believe that the decline in religion is a bad thing, while only 12% believe it’s a good thing.

Safety has increased a ton. Risk taking has also plummeted since ~2008.

iGens increasingly believe that they need safe spaces. They want to be safe from everything, including any idea that disagrees with their own.

School’s focuses have shifted. It is now on student’s emotional state rather than on intellectual development, sacrificing challenging discussions for the possibility that a student might feel upset.

“In their always online lives, words can reach out and do damage even when you’re alone.”

iGen’ers are more likely to report things to authorities rather than confronting them themselves.

“In a recent poll, 70% of adults had said they thought the world wasn’t as safe as before, despite all evidence pointing the other way. We protect students from danger, real and imaginary, and are then surprised when they go to college and create safe spaces designed to repel the real world”

iGen’ers are much more focused on practicality, job security, and less likely to be entrepreneurial. This is very different from Millennials. A lot of this is driven by growing up during the Recession and also always having large sums of student loans.

The number of sexual partners has been decreasing, especially for men.

iGen’ers are uncertain about relationships and are more likely to get married later. They cite not wanting to get hurt and explore their twenties while having fun as their main reasons.

“Better to loved and lost/then never to have loved at all” has become “its better not to have loved, because what if you lose it?”

Generational shift that could explain safe spaces: iGen’ers witnessed the harm of hateful speech but not the harm of censorship.