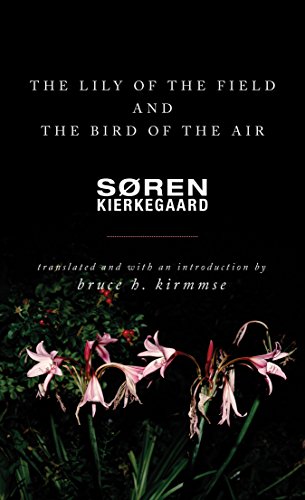 The Lily of the Field and the Bird of the Air

Short book, but it packs a punch. It was a bit criptic at times and has a strong Christian undertone. Not sjure it was the best intro to Kierkegaard's ideas.

For Kierkegaard, Christianity is a moral and spiritual exercise that has the ultimate purpose of teaching human beings their imperfection, their weakness and selfishness, in the face of the perfection, majesty, and absolute otherness of God.

Both Kierkegaard and Thoreau were indefatigable walkers

NO ONE can serve two masters, for he must either hate the one and love the other, or hold fast to one and despise the other. You cannot serve God and mammon.

And when one knows the frightful truth that there is no evasion or excuse—well, then one naturally refrains from finding it, for what is not cannot be found—but one also refrains from seeking it; and then one does what one shall.

The bird keeps silent and waits: it knows, or rather it fully and firmly believes, that everything takes place at its appointed time.

When one speaks, even if one says only a single word, one misses the moment. Only in silence is the moment.

For with God, when the notion of God disappears or is distorted, the either/or also disappears.

In human society, in everyday dealings, in associating with the multitude, there seems to be a great distance between holding fast to someone and despising him: “I do not need to associate with that person,” someone says, “but of course it by no means follows from this that I despise him, not at all.” And this is indeed how it is in relation to the many people with whom a person associates in social talkativeness and without essential inwardness, more or less indifferently. But the smaller the number becomes, the less talkative social intercourse becomes—that is, the more inward it becomes—the more does an either/or begin to become the law for the relationship.

And intercourse with God is in the deepest sense unsociable, unconditionally so. Just take two lovers, a relationship that is also unsociable, precisely because it is so inward: the rule for them and their relationship is: either we hold fast to one another or we despise one another.

When the bird comes into contact with the harshness of this life, when it is tried with difficulties and opposition, when, every morning, day after day, it finds that its nest has been disturbed: every day, the obedient bird begins its work all over again with the same joy and meticulousness it displayed the first time. In simple fashion and with the help of unconditional obedience, it understands one thing, but understands it unconditionally: that this is its work and that it is solely concerned with doing it.

The gospel, which is the wisdom of upbringing, does not get involved in an intellectual or verbal quarrel with a person in order to prove to him that it is so; the gospel knows very well that this is not the way things are done, that a human being does not first understand that what it says is so and then decide to obey unconditionally, but the reverse, that only by unconditionally obeying does a human being come to understand that what the gospel says is so.

“The joyful teachers,” indeed, because you know that joy is communicative, and therefore no one teaches joy better than a person who is joyful himself.

There is a today; it is. Indeed, an infinite emphasis is placed upon this is. There is a today—and there is no worry, absolutely none, about tomorrow or the day after tomorrow. This is not foolishness on the part of the lily and bird, but is the joy of silence and obedience.

What is joy, or what is it to be joyful? It is truly to be present to oneself;

And the truer it is that you are today, the more you are entirely present to yourself in being today, the less does tomorrow, the day of misfortune, exist for you.

If you do not become unconditionally joyful in this situation, the fault lies unconditionally in you, in your clumsiness in casting all your sorrow upon him, in your unwillingness to do so, in your conceitedness, in your stubbornness—in short, it lies in your not being like the lily and the bird.

For if you abide in God, then whether you live or die, whether things go well or badly for you while you are alive; whether you die today or only after seventy years; and whether you find your death at the bottom of the sea, at its greatest depth, or you are exploded in the air: you still do not come to be outside of God, you abide—thus you remain present to yourself in God and therefore on the day of your death you are in paradise this very day.