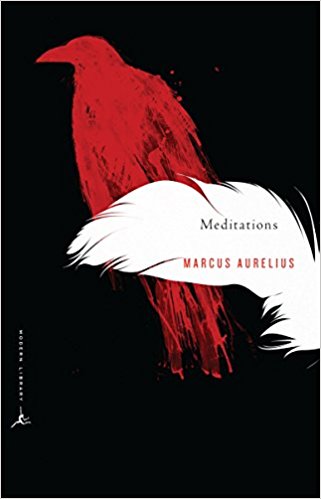 One of three thought leaders in the stoic philosophy, this book is his notes outlining his personal philosophy to himself as the Roman Emperor from 161-180 A.D. Timeless reminders about inner peace and how to accept things as they are. This book had less of an impact on me compared with Letters from a Stoic (probably just because I read Letters first), but was still powerful nonetheless.

Stoicism generally looks at the world as determined, and leaves no room for free will or human moral responsibility.

Marcus Aurelius focuses on three disciplines: perception, action and will.

“To read attentively – not to be satisfied with ‘just getting the gist of it.’”

“To recognize the malice, cunning and hypocrisy that power produces, and the peculiar ruthlessness often shown by people from ‘good families’”

“That I wasn’t more talented in rhetoric of poetry, or other areas. If I’d felt that I was making better progress I might never have given them up.”

Aurelius talks about being part of a larger whole. No one can do harm to you, it’s only harm to them if they do something wrong to you.

“You could leave life right now. Let that determine what you do and say and think”

“Anything at all: the applause of the crowd, high office, wealth of self-indulgence. All of them might seem to be compatible with it – for a while. But suddenly they control us and sweep us away.”

“Forget everything else…Each of us lives only now, this brief instant”

“Nowhere you can go is more peaceful….than your own soul”

A major theme for Aurelius is that all things fade away with time, and so we shouldn’t be as concerned about losing things because in time, all things will be lost.

“That everything you see will soon alter and cease to exist. Think of how many changes you’ve already seen. “

“Suppose that a god announced that you were going to die tomorrow “or the day after.” Unless you were a complete coward you wouldn’t kick up a fuss about which day it was, what difference could it make? Now recognize that the difference between years from now and tomorrow is just as small.”

“So remember this principle when something threatens to cause you pain: the thing itself was no misfortune at all; to endure it and prevail is great good fortune”

“The things you think about determine the quality of your mind”

“So other people hurt me? That’s their problem. Their character and actions are not mine. What is done to me is ordained by nature, what I do by my own”

“You can live here as you expect to live there”

“Remember, nothing belongs to you but your flesh and blood – and nothing else is under your control.”

“The best revenge is not to be like that”

“No, but to be admired by Posterity – people they’ve never met and never will – that’s what they set their hearts on. You might as well be upset at not being a hero to your great-grandfather.”

“It’s the truth I’m after, and the truth never harmed anyone. What harms us is to persist in self-deceit and ignorance.”

“Alexander the Great and his mule driver both died and the same thing happened to both. They were absorbed alike into the life force of the world, or dissolved alike into atoms”

“Think of yourself as dead. You have lived your life. Now take what’s left and live it properly”

“Look at who they really are, the people whose approval you long for, and what their minds are really like”