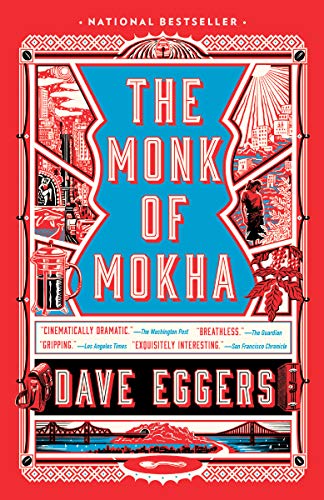 Great true story! This book teaches you a lot about coffee and Yemen through the story of Mokhtar Alkhanshali, a San Francisco-born Yemeni who made it his mission to bring Yemeni coffee back to America. It was also refreshing to read a startup story that had a humanitarian twist to it.

"Who knew of all this?" Mokhtar wondered. He could ask anyone on the street where coffee had been born and they might say Paris. They might say Africa. They might say Colombia or Java. But who would say Yemen? What the world knew about Yemen now was terrorism and drones. Since the bombing of the USS Cole off the coast of Aden, Mokhtar had seen his parents country devolve from happy Arabia to what some considered one of the world's most menacing places, home to burgeoning al Qaeda and ISIS cells. And the relentless American drone strikes meant to neutralize those threats.

The CQI then was committed to leading as many farmers as possible into Q grading courses. When the farmers, millers, exporters, roasters and retailers were all having a common conversation about the same coffee then real empowerment could happen. If a Rwandan producer knows how to improve his coffee and can keep it and raid it, he can bring it to the 90s. On a scale that topped out at 100, anything in the 90s was considered extraordinary. And that farmer could transform his business from a low-wage commodity at the mercy of the world commodity market into a specialty business where he could work directly with roasters of his choosing.

The tree didn't willingly give up its fruit. The labor intensiveness, which Mokhtar had read about and knew from Willum and Jody and Stephen and Camillo and Tedeschi, now became alarmingly real to him. To approach one of these trees then isolate a fruit cluster then examine 15 fruits from that cluster then pull from the cluster only the three or four cherries that were ready that day, each one resisting just a bit.

"Look at him," one of the women said. "It's so barbaric and backward." It took Mokhtar a second to believe she was talking about him. She spoke in English thinking Mokhtar was a peasant who had somehow wandered into this sophisticated urban café. He was wearing his dagger and carrying his pistol. And between that in his disheveled state he understood that she took him for a tribesmen from Yemen's northern hinterlands, who are seen as rough and violent and were often derided by city dwellers.

"Been nice knowing you!" Mokhtar said. He figured the odds of survival were about 60/40. As they pushed the taxi, Mokhtar noticed a propane tank attached to the trunk. This was common in Yemen given the gasoline shortages: drivers rigged their engines to run on propane. Mokhtar and Nuri laughed harder. They were pushing a taxi with an exposed propane tank while machine gunfire rattled over their heads! They couldn't run away - all their coffee was in the taxi.

When the imam asked God to forgive the sins of those present the men around him wept an Mokhtar knew he might die there. That at any moment a bomb would rip through the roof. "Had it been a good life?" Mokhtar thought. He wasn't sure. It was incomplete. He should have started all this coffee business sooner, he thought. Had begun a year earlier, he would have at least done something finished something before the bombs rained down.