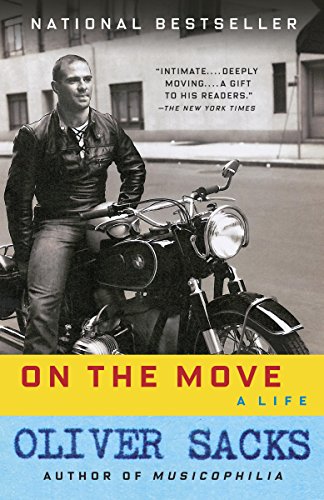 On The Move: A Life

Loved this book! It's delightful when a great writer has an interesting life and writes in in an autobiography. If you don't know much about Oliver Sacks, pick this one up and learn about a great human journey.

I had never had so much money at once. This time I went not to the white horse but to Blackwell's bookshop next door to the pub and bought, for 44 pounds, the twelve volumes of the Oxford English Dictionary (for me the most coveted and desirable book in the world). I was to read the entire dictionary through when I went on to medical school and I still like to take a volume off the shelf now and then for bedtime reading.

I told Richard that I was in love with him, not knowing how he would react. He hugged me, gripped my shoulders, and said, "I know. I am not that way but I appreciate your love and love you too, in my own way." I did not feel rebuffed or broken-hearted. He had said what he had to say in the most sensitive way, and our friendship continued.

By saying that we should also discuss the writings of our 19th century forebears relating what we were seeing in patients to their observations and thoughts. This was seen by the others as archaism. We were short of time and we had better things to do than consider such obsolete matters. This attitude was reflected implicitly in many of the journal articles we read. They made little reference to anything more than five years old. It was as if neurology had no history.

...I was poised motionless above the ground the whole planet rotating silently beneath me. My only stops were at gas stations to fill the tank to stretch my legs and exchange a few words with a gas attendant. If I held the bike at its maximum speed, I could reach the Grand Canyon in time to see the sunrise. I would sometimes pull up at a little motel some distance from the canyon where I would grab some sleep but usually I slept outside in my sleeping bag.

And I was ever again to enjoy biking life on the road with a sort of freedom enjoy I had had in California. I sometimes wonder why I have spent more than 50 years in New York when it was the West, and especially the Southwest, which so enthralled me. I now have many ties in New York: to my patients, my students, my friends, and my analyst. But I have never felt it move me the way California did.

We idealized each other. We saw ourselves spending long, loving, creative lives together. Carl fulfilling himself as an artist, I as a scientist. But then the feeling started to fade. We asked ourselves whether the experience we had shared was real, authentic, given the huge aphrodisiac thrust of the amphetamines. I found this question particularly humiliating. Could so lofty a transport as falling in love be reduced to something purely physiological?

It was crucial for me to find something with meaning and this for me was seeing patients. As soon as I started clinical work in October of 1966 I felt better. I found my patients fascinating. And I cared for them. I started to taste my own clinical and therapeutic powers and, above all, the sense of autonomy and responsibility which I had been denied when I was still a resident in training.

I fell in love too with Sydney and later with the Daintree rainforest and the Great Barrier Reef in Queensland, which I found overwhelmingly beautiful and strange. Seeing Australia's unique flora and fauna made me think of how Darwin was so astonished by the plants and animals in Australia that he wrote in his journal, "two distinct creators must have been at work.".

Bonds, land, art could all lose their value overnight. But gold, element seventy nine he used to say to please me, would always hold its value. Why should he work hold a job when he could live, be independent, a free man without doing so? I liked his courage, his forthrightness in saying this and felt in a way that he was one of the freest souls I knew.

In those rare, heavenly states of mind, I may write non-stop until I can no longer see the paper. Only then do I realize that evening has come and that I had been writing all day. Over a lifetime, I have written millions of words. But the act of writing seems as fresh - and as much fun - as when I started it nearly 70 years ago.