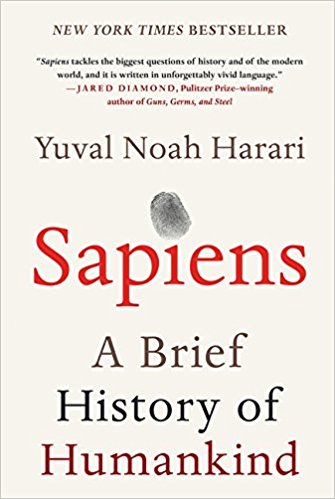 One of the best-selling books of the past few years for good reason, Harari makes some bold claims as he walks through the history of humans. If you take his ideas with an open mind, it can have a tremendous impact. Definitely changed the way I look at the agricultural revolution, why certain religions have been successful, and how meaningless humans are relative to nature, among other things.

As a species, we are just like any other, we just happen to get lucky with larger brains. Part of that advance was figuring out fire because it could help us digest food with less energy, which gave our brains more energy (many other primates spend a significant amount of energy chewing and digesting food).

Agriculture seems to have sprung up around the world at about the same time. It wasn’t necessarily a good thing, but it did lead to more of our species. We now had to guard things and weren’t as “antifragile” because we weren’t chasing animals anymore. Grain became the most successful plant of all time thanks to humans cultivating it.

Cognitive, the first revolution, defined by language. A big thing for Harari is that we gossip and talk about each other, and that makes us valuable. For example, we can let a group know that one person isn’t trustworthy, and this has valuable implications for the group. We can also talk about things that don’t exist yet, which allows us to plan in advance for danger, food, etc.

A likely reason that sapiens were able to beat out Neanderthals (despite them being stronger and having larger brains) is our ability to work well in group, rather than individually. While normally the Dunbar number of 150 people is about how many a group can sustain, through shared myths like religion and political systems, we were able to team up with much more than 150 other people (example: wars).

Some cultures are more likely to self-perpetuate. For example, both Islam and Christianity are missionary and also aren’t opposed to using violence to achieve their goals, so it makes complete sense that they are some of the strongest religions today. Many non-missionary and non-violent religions likely failed in part to those reasons.

The writing revolution was another large breakthrough. It started to keep track of debts between farmers and merchants. Many societies perhaps wrote a lot more, but wrote on things that degraded so we will never know (unlike the Egyptians, which wrote little but wrote on walls).

Why are humans a male dominated society? Many other mammals (bonobos, elephants, whales) are female dominated. It doesn’t make a ton of sense because in most of the agricultural revolution and beyond, the women would be at home doing the hard work where men would be priests and scholars and other non-physical workers.

Harari makes the case that we should be looking at things from a biological perspective, and even the American constitution brings in human rights that don’t make any biological or evolutionary sense. Rewritten biologically: “We hold these truths to be self-evident, that all men evolved differently, that they are born with certain mutable characteristics, and among these are life and the pursuit of pleasure.”

He makes the case that whatever is possible is natural. For example, men having sex with other men is completely natural, because it is possible. It is only culture that says we can’t do certain things. A truly unnatural behavior, one that goes against the laws of nature, simply doesn’t exist. “No culture has ever forbid men to photosynthesize or… women to run faster than the speed of light. We get the limits instead from Christian theology”

Money is the figment of our collective imagination, and that’s why it works. The only reason people are willing to do tasks and get paid in a couple pieces of green paper is because they trust in that collective imagination of the other sapiens. “Religion asks us to believe in something. Money asks us to believe that other people believe in something”

“In 3 centuries, polytheistic Romans only killed a few thousand Christians. Over the next 1500 years, Christians slaughtered millions of other Christians over the interpretation of the same religion.”

We are very good as humans at understanding contradicting ideas. In parts of Christianity, Judaism and Islam, people believe in an omnipotent God, but also believe in an independent devil. Some also believe that God needs our help in its struggle against the devil (which has been part of the reason of the rise of extremists). Some Christians believe in the monotheistic God, the dualist devil and polytheistic saints.

Ideologies like socialism, liberalism, capitalism and communism are as much religions as Christianity and Islam (if defined as a system of human norms and values founded on a belief in a superhuman order).

Harari also understands that much of human innovation was caused by tradesmen tinkering with things, rather than scientists using theories to create things. Scientists just explained how things worked after the engineers and tinkerers invented the stuff.

If a major event ends up happening soon and wiping out the human race (along with many others), this isn’t really a problem. Perhaps rats that could hide in cracks would creep out after the event and, 65 million years later, look back on this event similar to how we view the end of dinosaurs: the beginning of their new existence.

Never before has peace been so prevalent than today, in that today people can’t even imagine war. Price of war has gone up: atomic war. Profit of war declined: not as concerned with physical resources (if silicon valley was invaded, it wouldn’t cause much trouble because nothing is unique to that physical land, it’s in the minds of people). The few full world wars are over physical resources (oil in the Middle East).

If happiness is determined by expectations, then advertising and mass media may be depleting the world of its contentment. Meaning is a big part of happiness, and is also just a delusion. The scientist who says her life is meaningful because she increases the store of human knowledge, the soldier who finds meaning claiming to fight for his homeland, and the entrepreneur who finds meaning in building a new company are no less delusional than their medieval counterparts who found meaning in reading scriptures, going on a crusade or building a new cathedral. If the Earth were to blow up tomorrow, the universe would go about its business as normal.