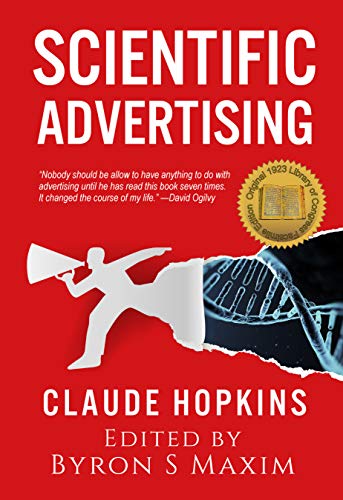 Excellent book on how to properly write ads. Written almost 100 years ago, it's amazing how many of the concepts are still being preached by the top marketers today.

The only purpose of advertising is to make sales. It is profitable or unprofitable according to its actual sales. It is not for general effect. It is not to keep your name before the people. It is not primarily to aid your other salesmen. Treat it as a salesman. Force it to justify itself. Compare it with other salesmen. Figure its cost and result. Accept no excuses which good salesmen do not make. Then you will not go far wrong.

Successful salesmen are rarely good speech makers. They have few oratorical graces. They are plain and sincere men who know their customers and know their lines. So it is in ad writing.

Some say “Be very brief. People will read for little.” Would you say that to a salesman? With a prospect standing before him, would you confine him to any certain number of words? That would be an unthinkable handicap. So in advertising. The only readers we get are people whom our subject interests. No one reads ads for amusements, long or short. Consider them as prospects standing before you, seeking for information. Give them enough to get action.

Ads are not written to entertain. When they do, those entertainment seekers are little likely to be the people whom you want.

When you plan or prepare an advertisement, keep before you a typical buyer. Your subject, your headline has gained his or her attention. Then in everything be guided by what you would do if you met the buyer face-to-face. If you are a normal man and a good salesman you will then do your level best.

Don’t think of people in the mass. That gives you a blurred view. Think of a typical individual, man or woman, who is likely to want what you sell. Don’t try to be amusing. Money spending is a serious matter. Don’t boast, for all people resent it. Don’t try to show off. Do just what you think a good salesman should do with a half-sold person before him.

The advertising man studies the consumer. He tries to place himself in the position of the buyer. His success largely depends on doing that to the exclusion of everything else.

This book will contain no more important chapter than this one on salesmanship. The reason for most of the non-successes in advertising is trying to sell people what they do not want. But next to that comes lack of true salesmanship.

Remember the people you address are selfish, as we all are. They care nothing about your interests or profit. They seek service for themselves. Ignoring this fact is a common mistake and a costly mistake in advertising.

The best ads ask no one to buy. That is useless. Often they do not quote a price. They do not say that dealers handle the product. The ads are based entirely on service. They offer wanted information.

People can be coaxed but not driven. Whatever they do they do to please themselves. Many fewer mistakes would be made in advertising if these facts were never forgotten.

The advertisement is read only by interested people who, by their own volition, study what we have to say. The purpose of a headline is to pick out people you can interest.

What you have will interest certain people only, and for certain reasons. You care only for those people. Then create a headline which will hail those people only. Perhaps a blind headline or some clever conceit will attract many times as many. But they may consist of mostly impossible subjects for what you have to offer. And the people you are after may never realize that the ad refers to something they may want.

The writer of this chapter spends far more time on headlines than on writing. He often spends hours on a single headline. Often scores of headlines are discarded before the right one is selected. For the entire return from an ad depends on attracting the right sort of readers. The best of salesmanship has no chance whatever unless we get a hearing.

On a soap, for instance, the headline “Keep Clean” might attract a very small percentage. It is too commonplace. So might the headline, “No animal fat.” People may not care much about that. The headline, “It floats” might prove interesting. But a headline referring to beauty or complexion might attract many times as many.

An automobile ad might refer in the headline to a good universal joint. It might fall flat, because so few buyers think of universal joints. The same ad with a headline, “The Sportiest of Sport Bodies,” might out pull the other fifty to one.

We learn, for instance, that curiosity is one of the strongest human incentives.

We learn that cheapness is not a strong appeal. Americans are extravagant. They want bargains but not cheapness. They want to feel that they can afford to eat and have and wear the best. Treat them as if they could not and they resent your attitude.

In the same way it is found that an offer limited to a certain class of people is far more effective than a general offer. For instance, an offer limited to veterans of the war. Or to members of a lodge or sect. Or to executives. Those who are entitled to any seeming advantage will go a long way not to lose that advantage.

If people can be made sick or well by mental impressions, they can be made to favor a certain brand in that way. And that, on some lines, is the only way to win them.

Platitudes and generalities roll off the human understanding like water from a duck. They leave no impression whatever. To say, “Best in the world,” “Lowest price in existence,” etc. are at best simply claiming the expected. But superlatives of that sort are usually damaging. They suggest looseness of expression, a tendency to exaggerate, a careless truth. They lead readers to discount all the statements that you make.

This is very important to consider in written or personal salesmanship. The weight of an argument may often be multiplied by making it specific. Say that a tungsten lamp gives more light than a carbon and you leave some doubt. Say it gives three and one-third times the light and people realize that you have made tests and comparisons.

He said, “Softens the beard in one minute.” “Maintains its creamy fullness for tens minutes on the face.” “The final result of testing and comparing 130 formulas.” Perhaps never in advertising has there been a quicker and greater success in an equally difficult field.

But one must consider that the average reader is only once a reader, probably. And what you fail to tell him in that ad is something he may never know.

Use pictures only to attract those who may profit you. Use them only when they form a better selling argument than the same amount of space set in type.

In some lines, like Arrow Collars and most in clothing advertising, pictures have proved most convincing. Not only in picturing the collar or the clothes, but in picturing men whom others envy, in surroundings which others covet. The pictures subtly suggest that these articles of apparel will aid men to those desired positions.

So with beauty articles. Picturing beautiful women, admired and attractive, is a supreme inducement. But there is a great advantage in including a fascinated man. Women desire beauty largely because of men. Then show them using their beauty, as women do use it, to gain maximum effect.

An advertiser at one time spent much money to educate people to the use of oatmeal. The results were too small to discover. All people know of oatmeal. As a food for children it has age-old fame. Doctors have advised it for many generations. People who don’t serve oatmeal are therefore difficult to start.

[Do I want to educate? Or turn people from one thing to another?]

A heading which asserts one claim may bring ten times the results of a heading which asserted another. An advertiser may go far astray unless he finds out. A tooth paste may tend to prevent decay. It may also beautify teeth. Tests will probably find that the latter appeal is many times as strong as the former.

An ad-writer, to have a chance at success, must gain full information on his subject. The library of an ad agency should have books on every line that calls for research. A painstaking advertising man will often read for weeks on some problem which comes up.

Sometimes in new campaigns comes the question of a name. That may be most important. Often the right name is an advertisement in itself. It may tell a fairly complete story, like Shredded Wheat, Cream of Wheat, Puffed Rice, Spearmint Gum, Palmolive Soap, etc.

Many coined names without meaning have succeeded. Kodak, Karo etc., are examples. They are exclusive. The advertiser who gives them meaning never needs to share his advantage. But a significant name which helps to impress a dominant claim is certainly a good advantage. Names that tell stores have been worth millions of dollars. So a great deal of research often precedes the selection of a name.

We cannot go after thousands of men until we learn how to win one.

Jell-O, Postum, Victrola, Kodak, etc., established coined names which came to typify a product. Some such names have been admitted to the dictionary. They have become common names, though coined and exclusive. Royal Baking Powder and Toasted Corn Flakes, on the other hand, when they pioneered their fields, left the way open to perpetual substitution. So did Horlicks Malted Milk.

Bear in mind that you are the seller. You are the one courting interest. Then don’t make it difficult to exhibit that interest. Don’t ask your prospects to pay for your selling efforts. Three in four will refuse to pay—perhaps nine in ten.

Almost any questions can be answered, cheaply, quickly and finally, by a test campaign. And that’s the way to answer them—not by arguments around a table. Go to the court of last resort—the buyers of your product.

To attack a rival is never good advertising. Don’t point out others’ faults. It is not permitted in the best mediums. It is never good policy. The selfish purpose is apparent. It looks unfair, not sporty. If you abhor knockers, always appear a good fellow.

Tell people what to do, not what to avoid.

Experience generally shows that a two-cent letter gets no more attention than a one-cent letter. Fine stationery no more than poor stationery. The whole appeal lies in the matter.

Another serious fault in coined names is frivolity. In seeking uniqueness one gets something trivial. And that is a fatal handicap in a serious product. It almost prohibits respect.