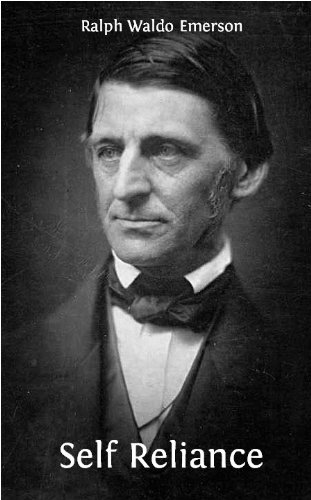 Wise book from a wise man. Good reminder to follow your instincts and values and not worry what society thinks. Some great quotes in here too.

Thus the tendency and traditions of Ralph Waldo Emerson’s ancestry were strong in the direction of scholarly pursuits and religious thought.

Emerson was tall and slender, not of robust physique, rather sallow in the face, with an aquiline nose, brown hair, and eyes of the “strongest and brightest blue.”

He worked hard every summer writing, and every winter travelling and lecturing. His habits were regular and his diet frugal, the only peptic luxury in which he indulged being pie at breakfast. Every morning was spent in his study, and he would go all day without food unless called to eat. His bed-time was ten o’clock, but, if engaged in literary work, he would sit up until one or two, and was able to do this night after night.

In every work of genius we recognize our own rejected thoughts: they come back to us with a certain alienated majesty. Great works of art have no more affecting lesson for us than this.

There is a time in every man’s education when he arrives at the conviction that envy is ignorance; that imitation is suicide; that he must take himself for better, for worse, as his portion; that though the wide universe is full of good, no kernel of nourishing corn can come to him but through his toil bestowed on that plot of ground which is given to him to till.

A man is relieved and gay when he has put his heart into his work and done his best; but what he has said or done otherwise, shall give him no peace.

Society is a joint-stock company, in which the members agree, for the better securing of his bread to each shareholder, to surrender the liberty and culture of the eater. The virtue in most request is conformity. Self-reliance is its aversion. It loves not realities and creators, but names and customs.

Nothing is at last sacred but the integrity of your own mind. Absolve you to yourself, and you shall have the suffrage of the world.

Good and bad are but names very readily transferable to that or this; the only right is what is after my constitution, the only wrong what is against it. A man is to carry himself in the presence of all opposition, as if every thing were titular and ephemeral but he.

Virtues are, in the popular estimate, rather the exception than the rule.

What I must do is all that concerns me, not what the people think.

A foolish consistency is the hobgoblin of little minds, adored by little statesmen and philosophers and divines. With consistency a great soul has simply nothing to do. He may as well concern himself with his shadow on the wall. Speak what you think now in hard words, and to-morrow speak what to-morrow thinks in hard words again, though it contradict every thing you said to-day.— ‘Ah, so you shall be sure to be misunderstood.’ —Is it so bad, then, to be misunderstood? Pythagoras was misunderstood, and Socrates, and Jesus, and Luther, and Copernicus, and Galileo, and Newton, and every pure and wise spirit that ever took flesh. To be great is to be misunderstood.

The voyage of the best ship is a zigzag line of a hundred tacks. See the line from a sufficient distance, and it straightens itself to the average tendency. Your genuine action will explain itself, and will explain your other genuine actions. Your conformity explains nothing. Act singly, and what you have already done singly will justify you now.

Ordinarily, every body in society reminds us of somewhat else, or of some other person. Character, reality, reminds you of nothing else; it takes place of the whole creation. The man must be so much, that he must make all circumstances indifferent.

If we live truly, we shall see truly. It is as easy for the strong man to be strong, as it is for the weak to be weak.

If you are noble, I will love you; if you are not, I will not hurt you and myself by hypocritical attentions. If you are true, but not in the same truth with me, cleave to your companions; I will seek my own. I do this not selfishly, but humbly and truly. It is alike your interest, and mine, and all men’s, however long we have dwelt in lies, to live in truth.

A sturdy lad from New Hampshire or Vermont, who in turn tries all the professions, who teams it, farms it, peddles, keeps a school, preaches, edits a newspaper, goes to Congress, buys a township, and so forth, in successive years, and always, like a cat, falls on his feet, is worth a hundred of these city dolls. He walks abreast with his days, and feels no shame in not `studying a profession,’ for he does not postpone his life, but lives already. He has not one chance, but a hundred chances.

Prayer looks abroad and asks for some foreign addition to come through some foreign virtue, and loses itself in endless mazes of natural and supernatural, and mediatorial and miraculous. Prayer that craves a particular commodity, —any thing less than all good, —is vicious.

The soul is no traveller; the wise man stays at home, and when his necessities, his duties, on any occasion call him from his house, or into foreign lands, he is at home still, and shall make men sensible by the expression of his countenance, that he goes the missionary of wisdom and virtue, and visits cities and men like a sovereign, and not like an interloper or a valet.

Travelling is a fool’s paradise. Our first journeys discover to us the indifference of places. At home I dream that at Naples, at Rome, I can be intoxicated with beauty, and lose my sadness. I pack my trunk, embrace my friends, embark on the sea, and at last wake up in Naples, and there beside me is the stern fact, the sad self, unrelenting, identical, that I fled from.

That which each can do best, none but his Maker can teach him. No man yet knows what it is, nor can, till that person has exhibited it.

Shakspeare will never be made by the study of Shakspeare. Do that which is assigned you, and you cannot hope too much or dare too much.

The civilized man has built a coach, but has lost the use of his feet. He is supported on crutches, but lacks so much support of muscle. He has a fine Geneva watch, but he fails of the skill to tell the hour by the sun. A Greenwich nautical almanac he has, and so being sure of the information when he wants it, the man in the street does not know a star in the sky. The solstice he does not observe; the equinox he knows as little; and the whole bright calendar of the year is without a dial in his mind. His note-books impair his memory; his libraries overload his wit; the insurance-office increases the number of accidents; and it may be a question whether machinery does not encumber; whether we have not lost by refinement some energy, by a Christianity entrenched in establishments and forms, some vigor of wild virtue. For every Stoic was a Stoic; but in Christendom where is the Christian?

Society is a wave. The wave moves onward, but the water of which it is composed does not.

But a cultivated man becomes ashamed of his property, out of new respect for his nature. Especially he hates what he has, if he see that it is accidental, —came to him by inheritance, or gift, or crime; then he feels that it is not having; it does not belong to him, has no root in him, and merely lies there, because no revolution or no robber takes it away.