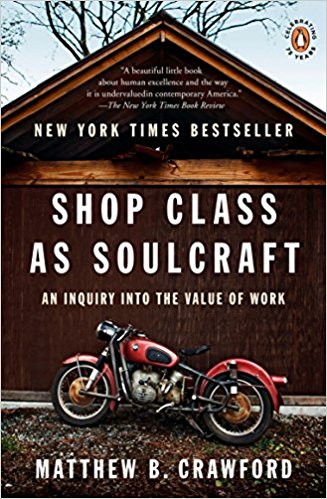 Highly recommend for anyone who works in a job that primarily deals with arbitrary instructions, incentives or guidelines (IE most corporate jobs). Crawford makes the case that for a career, dealing with physical things rather than intangible ideas will lead to a more satisfying existence.

The college student interviews for a job as a knowledge worker and finds that the corporate recruiter never asks him about his grades and doesn’t care what he majored in. He senses that what is demanded of him is not knowledge, but rather that he project a certain kind of personality…is all his hard work in school just for show?

I never ceased to take pleasure in the moment at the end of a job when I would flip the switch and there was light. It was an experience of agency and competence. The effects of my work were visible for all to see, so my competence was real for others as well. It had a social currency.

The craftsman is proud of what he has made and cherishes it, while the consumer discards things that are perfectly serviceable in the pursuit of the new. The craftsman is more possessive; more tied to the present. The dead incarnation of past labor.

The surgeon’s judgement is simultaneously technical and deliberative, and that mix is the source of its power. This could be said of any manual skill that is diagnostic, including motorcycle repair.

There is evidence to suggest that the new frontier of capitalism lies in doing to office work what was previously done to factory work: draining it of its cognitive elements. Paradoxically, educators who would steer students towards cognitively–rich work might do this best by rehabilitating the manual trades based on a firmer grasp of what such work is really like.

“You can’t hammer a nail over the internet”

Genuine knowledge work comes to be concentrated in an ever smaller elite. It seems we must take a cold-eyed view of knowledge work and reject the image of a rising sea that lifts all boats. More likely is a rising sea of clerkdom. To hope otherwise is to hope for a basic reversal in the modern economy, that is cognitive stratification.

Economics only recognizes certain virtues and not the most impressive ones at that. Spiritedness is an assertion of one’s own dignity, and to fix one’s own car is not merely to use up time, it is to have a different experience of time. Of one’s car and of one’s self.

In any hard discipline, whether it be gardening, structural engineering or Russian, one submits to things that have their own, intractable ways. Such hardness is at odds with the ontology of consumerism, which seems to demand a different conception of reality.

[About philosopher Albert Borgman] …He distinguishes between commanding reality and disposable reality, which corresponds to things versus devices. The former convey meaning through their own inherent qualities, while the latter answer to our shifting psychic needs. As an instance of the eclipse of commanding reality and the prominence of disposable reality, Borgmann focuses on music. People play musical instruments a lot less than they used to. Now, we listen to the stereo or iPod. An instrument is arduous to master and limited in its range, whereas a stereo is undemanding and makes every sort of music instantly available, granting us a kind of musical autonomy. The stereo as a device contrasts with the instrument as a thing. A thing in the sense of which I want to use the term, has an intelligible and accessible character and calls forth skilled and active human engagement. A thing requires practice, while a device invites consumption. Things constitute commanding reality. Devices procure disposable reality.

For example, in customizing a car or motorcycle from scratch, the builder must harmonize aesthetic concerns with functional ones and make compromises so the result isn’t prone to say, catching on fire. The consumer is left with a mere decision. Since this decision takes place in a playground-safe field of options, the only concern it elicits is personal preference. The watch word here is “easiness” as opposed to “heedfulness”.

Getting it right demands that you be attentive, in the way of a conversation, rather than assertive in the way of a demonstration. I believe the mechanical arts have a special significance to our time because they cultivate not creativity, but the less glamorous virtue of attentiveness. Things need fixing and tending, no less than creating.

Any discipline that deals with an authoritative, independent reality requires honesty and humility. I believe this is especially so of the stochastic arts that fix things, such as doctoring and wrenching, in which we are not the makers of the things we tend.

I landed the job at the think tank because I had prestigious education in the liberal arts. Yet the job itself felt illiberal. Coming up with the best arguments money could buy. This wasn’t work befitting a free man, and the tie I wore started to feel like the mark of the slave. As I sat in my K Street office, Fred’s life as an independent tradesman gave me an image of liberality that I kept coming back to.

What’s more, it may create unemployability of a particularly disconcerting type. The man who has gone through college or university easily becomes psychically unemployable in manual occupations without necessarily acquiring employability in, say professional work.

My efforts to read, comprehend, and write abstracts of 28 academic journals per day required me to actively suppress my own ability to think. Because the more you think, the more the inadequacies in your understanding of an author’s argument come into focus. This can only slow you down.

Such concerns can be rendered appropriate and higher-level management support secured only by demonstrating how they contribute to profits. Not because the higher-level managers are heartless, but because such a demonstration provides everyone needed cover. In fact, a lower-level manager may need only to put on a performance of hard-headedness before her superiors and produce the stage props of a profit-maximizing calculation: graphs, charts and so on. Unless she has these skills of the corporate dramatist, she is unlikely to get the official cover she needs to do the right thing by her workers.

Where there is real work being done, the order of things is not quite so fragile. Not surprisingly, it is the office, rather than the job site, that has seen the advent of speech codes, diversity workshops and other forms of higher regulation. Some might attribute this to the greater mixing of the sexes in the office, but I believe a more basic reason is that when there is no concrete task that rules the job, an autonomous good that is visible to all, then there is no secure basis for social relations. Maintaining consensus and pre-empting conflict become the focus of management and as a result everyone feels like they have to walk on eggshells. Where no appeal to a carpenter’s level is possible, sensitivity training becomes necessary. The characteristic form of address on a job site is command. In the office…managers’ acute sense of organizational contingency makes them speak gingerly to one another since the person criticizes or argues with today could be one’s boss tomorrow. Moreover, the crucial premium in a corporation on style includes an expectation of a certain finesse in handling people, a sensitivity to others.

To repeat: when Bob looks at a part and judges it to have 10,000 miles left on it, he is relying on a tacit integration of sensual knowledge, unconsciously referring what he sees to patterns built up in his mind through long  experience.

It is one thing for the Chinese factory worker to know somewhere in the US hinterlands the vernacular rural American quilt that she has stitched together is being used and that it has some culturally specific significance to the person using it, which she can barely comprehend. It is another thing for a carpenter to walk around a town and see the new entry way he designed and built for that store. To learn from a direct experience and from chatting with others of its functional and aesthetic achievements, and shortcomings. And to modify future work in accordance with this running feedback that is picked up in the course of daily activities.

My point, finally, isn’t to recommend motorcycling in particular nor to idealize the life of a mechanic. It is rather to suggest that if we follow the traces of our own actions to their source, they intimate some understanding of the good life. This understanding may be hard to articulate. Bringing it more fully into view is the task of moral inquiry. Such inquiry may be helped along by practical activities in company with others, a sort of conversation indeed. In this conversation lies the potential of work to bring some measure of coherence to our lives.

Crawford mentions a story about how he saw electricians in a foreign country and how he could relate to them. Despite not speaking their language or knowing anything about their life, he could connect with them because they had the same concerns and demands from being an electrician.