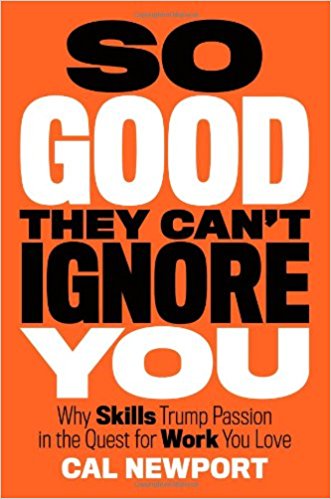 So Good They Can’t Ignore You

“Don’t follow your passion” turns out to be pretty good advice for career choice. Basically, working hard and getting good at something leads to the most satisfying career. It’s less important what you do; it’s instead important that you do it well.

The Passion Hypothesis – The key to occupational happiness is to first figure out what you’re passionate about and then find a job that matches that passion…”Follow your passion” might just be terrible advice.

Compelling careers often have complex origins that reject the simple idea that all you have to do is follow your passion. This observation may come as a surprise for those of us who have long basked in the glow of the passion hypothesis. It wouldn’t, however, surprise the many scientists who have studied questions of workplace satisfaction using rigorous peer-reviewed research.

There are many complex reasons for workplace satisfaction, but the reductive notion of matching your job to a pre-existing passion is not among them.

Self-Determination Theory (STD) tells us that motivation, in the workplace or elsewhere, requires that you fulfill three basic psychological needs – factors described as the “nutriments” required to feel intrinsically motivated for your work:

This was a frustrating process: I felt like I was stretching to convince the world that my work was interesting, yet no one cared. Martin’s axiom gave me a reprieve from the self-promotion. “Stop focusing on these little details,” it told me. “Focus instead of becoming better.” Inspired, I turned my attention from my website to a habit that continues to this day: I track the hours spent each month dedicated to thinking hard about research problems.

Irrespective of what type of work you do, the craftsman mindset is crucial for building a career you love.

When Feuer left her advertising career to start a yoga studio, not only did she discard the career capital acquired over many years in the marketing industry, but she transitioned into an unrelated field where she had almost no capital.

Duffy started his own company with enough career capital to immediately thrive – he was one of the world’s best logo men and had a waiting list of clients. Feuer started her company with only two hundred hours of training and an abundance of courage.

The big-picture point worth noting here, however, is that these disqualifying traits still have nothing to do with whether a job is the right fit for some innate passion.

But the difference between Wall Street and Hollywood in the style of work is staggering. Imagine: no e-mail, no late-night contract negotiations, no need to master intricate bond markets or legal precedents. As a writer your whole focus is on one thing: telling good stories. The work can be instance, as you’re often under deadline to deliver the next script, but it only lasts half a year, and it’s immensely creative.

The question hanging over this comparison is why, even though we had both played seriously for the same amount of time, did I end up an average high school strummer while Jordan became a star?…The difference in our abilities by the age of eighteen had less to do with the number of hours we practiced…and more to do with what we did with those hours.

To the high school version of myself, the idea of learning complicated lead parts by ear would have been way past my threshold of mental strain and patience. But Jordan came to enjoy this labor…Not only did Jordan’s early practice require him to constantly stretch himself beyond what was comfortable, but it was also accompanied by instant feedback…This, then, explains why Jordan left me in the dust. I played. But he practiced.

The grand masters, on average, dedicated around 5,000 hours out of their 10,000 to serious study. The intermediate players, by contrast, dedicated only around 1,000 to this activity.

Outside of fields such as chess, music and professional athletics, which have clear competitive structures and training regimes, few participate in anything that even remotely approximates this style of skill development…if you just show up and work hard, you’’ soon hit a performance plateau beyond which you fail to get any better.

An auction market, by contrast, is less scructured: There are many different types of career capital, and each person might generate a unique collection. The clean-tech space is an auction market.

A useful heuristic in this situation is to seek open gates – opportunities to build capital that are already open to you.

Pushing past what’s comfortable, however, is only one part of the deliberate-practice story; the other part is embracing honest feedback – even if it destroys what you thought was good.

Instead, by the time he made the plunge into full-time farming in 2001, when he bought his first land, he had been painstakingly acquiring relevant career capital for close to a decade.

It didn’t take her long to realize that just because you’re committed to a certain lifestyle doesn’t mean you’ll find people who are committed to supporting you…In other words, she tried to obtain control without any capital to offer in return, and ended up with a mere shadow of real autonomy. Ryan of Red Fire Farm, by contrast, avoided this trap by building up a decade’s worth of relevant career capital before taking the dive into full-time farming.

“I have this principle about money that overrides my other life rules,” he said. “Do what people are willing to pay for.”

The Law of Financial Viability: when deciding whether to follow an appealing pursuit that will introduce more control into your work life, seek evidence of whether people are willing to pay for it. If you find this evidence, continue. If not, move on.

[It’s probably best to wait until a bit later in your career to define a mission and identify your craft. Getting some training and practice can help identify opportunities]

In the words of Seth Godin, this early project was a “brown cow.” By contrast, teaching your computer to write its own complex music is a purple cow; it inspires people to take notice and spread the word.

I then cashed in this asset by published a student-advice guide. These experiences helped me build an exciting student life – I was, I imagine, the only student on Dartmouth’s campus taking regular calls from his literary agent – but neither came from the pursuit of a pre-existing passion.

When it later came time to decide what to do after college, I had two offers in hand, one from Microsoft and the other from MIT. This is the type of decision that would paralyze my classmates. I, however, didn’t see any reason to worry. Both paths, I was sure, would yield numerous opportunities that could be leveraged into a remarkable life. I ended up choosing MIT – among other reasons, in order to stay closer to my girlfriend.

In other words, if you’re not putting in the effort to become, as Steve Martin put it, “so good they can’t ignore you,” you’re not likely to end up loving your work – regardless of whether or not you believe it’s your true calling.

The sheet has a row for each month on which I keep a tally of the total number hours spent that month in a state of deliberate practice.

It’s much easier to redesign your graduate-student Web page than it is to grapple with a mind-melting proof…Getting better and better at what I did became what mattered most, and getting better required the strain of deliberate practice.