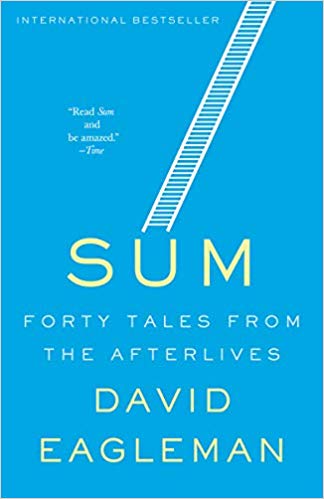 Sum: 40 Tales from the Afterlife

Somewhere between philosophy and science fiction, I was stunned by the cleverness of this little book. Each tale seemed to have me rethinking how the world / afterlife could be ordered – it was one of the most refreshing things I have ever read.

[Note: this is a short book – go read it for yourself! These are just to remind me of each story.]

In the afterlife you relive all your experiences, but this time with the events reshuffled into a new order: all the moments that share a quality are grouped together.

At some point, it dawns on you that this is the afterlife: the world is only made up of people you’ve met before…The missing crowds make you lonely. You begin to complain about all the people you could be meeting. But no one listens or sympathizes with you, because this is precisely what you chose when you were alive.

And that’s not the worst of your revelation. You realize that the next time you return here, with your thick horse brain, you won’t have the capacity to ask to become a human again. You won’t understand what a human is. Your choice to slide down the intelligence ladder is irreversible. And just before you lose your final human faculties, you painfully ponder what magnificent extraterrestrial creature, enthralled with the idea of finding a simpler life, chose in the last round to become a human.

Meaning varies with spatial scale. So we have concluded that communicating with her is not impossible, but it is pointless. And that is why we are now hunkered down silently on the surface of this noiseless planet, whispering through a slow orbit, trying not to draw attention to ourselves.”

This is why He now locks Himself in His room, and at night sneaks out onto the roof with Frankenstein, reading again and again how Dr. Victor Frankenstein is taunted by his merciless monster across the Arctic ice. And God consoles Himself with the thought that all creation necessarily ends in this: Creators, powerless, fleeing from the things they have wrought.

It is not life that is a dream; it is death that is a dream. Stranger still, it is not your dream; it is someone else’s…What’s the problem with this? There is a woman in my dreams whom I see every night, but I can never catch up with her, passing as we do into our next worlds.

There are three deaths. The first is when the body ceases to function. The second is when the body is consigned to the grave. The third is that moment, sometime in the future, when your name is spoken for the last time…And that is the curse of this room: since we live in the heads of those who remember us, we lose control of our lives and become who they want us to be.

Eventually, She dropped Her hands from Her hips and He from His. She spoke the first tender words in months, asking if He was hungry. He responded by offering to cook something for them both. The planets of men and women drifted back together, and the race started again, with its pursuits, seductions, choices, competitions, temptations, arguments, and a great cosmic sigh of relief as they all fell emancipated into each other’s arms.

At some point in the development of their society, these creatures began to wonder: Why are we here? What is the purpose of our existence? These turned out to be very difficult questions to answer. So difficult, in fact, that rather than attacking the questions directly, they decided it might be easier to build supercomputing machines devoted to finding the answers. So they invested the labor of tens of generations to engineer these. We are their machines.

And God suddenly bolts up in His bed with a revelation: everything that creates itself upon the backs of smaller scales will by those same scales be consumed.

When you die, you are brought before a panel of Collectors. They debrief you and struggle to understand your motivations. Why did you decide to break off this relationship? What did you appreciate about that relationship? What was wrong with so-and-so, who seemed to have everything you wanted?

All this recent disappointment has put God in an awkward position. He nowadays spends much of His time trying to comfort His subjects scattered across the cloudscapes. “Your fantasies have cursed your realities,” He explains, wringing His hands. “The Company offered you no evidence that it would work; why did you believe them?” Although He doesn’t say it, everyone knows what He’s thinking when He retires to His bed at night: that one of His best gifts—the ability to have faith in an unseen hereafter—has backfired.

Here in this Purgatory, all the people with whom you’ve ever come in contact are gathered. The scattered bits of you are collected, pooled, and unified. The mirrors are held up in front of you. Without the benefit of filtration, you see yourself clearly for the first time. And that is what finally kills you.

Over the millennia, God has grown bitter. Nothing continues to satisfy. Time drowns Him. He envies man his brief twinkling of a life, and those He dislikes are condemned to suffer immortality with Him.

In the end, great masses of rioters break into your medical complex, kick the plugs out of the computers, and once again have a great celebration to mark the end of the last unnatural life, and you end up back in the Technicians’ waiting room.

You clear your throat. “That’s when you came up here?” “I came here for the same reason doctors wear uniforms of long white coats,” He answers. “They don’t do it for their benefit, but for yours.”

Very few people visit Him anymore. He finds Himself lonely and misunderstood. He often invites over men like Martin Luther King, Jr., and Mahatma Gandhi, and together they sit on the porch drinking tea and lamenting about movements that sweep over the tops of their founders.

To the microbes, who have lost a family member, these are the mystifying and often cruel ways in which the universe works. They look to God for answers. God attributes these events to statistical fluctuations over which He has no control and no understanding.

That’s why you’re under this defoliating tree now, machine-gun chatter in your ears, your nose aching with Agent Orange, bazooka rounds lighting up the night, clenching the blood-blackened soil in your fingers while the leaves drop around you, loyally crusading for your version of God’s nonexistence.

They don’t understand they’ve been blessed with insulation from the future, while the sinners are cursed in the blue-green glow of the televisions to witness every moment of it.

But in truth there is a deeper reason you play your part so convincingly. If you play your part well, you can more quickly leave this acting job. Those with the best behavior are rewarded with ignorance: they are reincarnated as an uninitiated Beneficiary. You could permanently blow the cover, but the Directors are confident that you won’t; they know you will sink to any depth of infidelity to preserve the lie for your eventual return to it.

The death switches simulate the society so completely that the entire social network is reconstructable. The planet’s memories survive in zeros and ones.

But with today’s rich data, the Re-Creators can reconstruct you so seamlessly that your afterlife is essentially a perfect replica of the original. It feels so much like the real thing that in the afterlife you only rarely wonder whether you’ve lived all this before, haunted occasionally by déjà vu, holding a book in your hand and not knowing whether this is the first time or a replay from aeons past.

They come to understand, with awe, the complexity of the compound identity that existed on the Earth. They conclude with a shudder that the Earthly you is utterly lost, unpreserved in the afterlife. You were all these ages, they concede, and you were none.

And it turns out that anything which enjoys life enjoys an afterlife. Platoons and plays and stores and congresses do not end—they simply move on to a different dimension. They are things that were created and existed for a time, and therefore by the cosmic rules they continue to exist in a different realm.

So while you may be pleased to know that there is, after all, divine intentionality, you may be disappointed to know that no two gods can agree. There are so many that it is difficult for them to enjoy any consequence except during brief statistical hiccups.

But it turns out that a tiny, unexpected bug has crept into the program, an anomalous algorithm that the Programmers did not intend and have not yet detected: our consciousness.

Here in the afterlife, everything exists in all possible states at once, even states that are mutually exclusive.

And yet, despite the initial success, the Cartographers are profoundly frustrated with the results. Despite their planetary coverage and long life spans, the mobile cameras collect very little that is useful for cartography. Instead, the devices turn their ingeniously created compact lenses directly into the gazes of other compact lenses—an ironic way to trivialize the technology.

In the afterlife, in the warm company of His accidental subjects, God now settles in comfortably, like a grandfather who looks down the long holiday table at his progeny, feeling proud, somehow responsible, and a little surprised.

Like a museum, these fields of gods, this pastoral encyclopedia of mythology, is a testament to human creativity and reification. The old gods are used to watching us here; the new gods are stung by how quickly they slipped from reverence and martyrdom to desertion and tourism.

But something has gone terribly wrong with Her plan. The truth does not convince. The newly arrived Loyals have an imperturbable capacity to hold the beliefs with which they arrived, a deep reluctance to consider evidence that separates them from their lifelong context.

The secret codes of life—whether presented as a gift or a burden—go totally unappreciated. And once again the Rewarder and the Punisher skulk off, struggling to understand why knowing the code behind the wine does not diminish its pleasure on your tongue, why knowing the inescapability of heartache does not reduce its sting, why glimpsing the mechanics of love does not alter its intoxicating appeal.

And thus your punishment is cleverly and automatically regulated in the afterlife: the more you fall short of your potential, the more of these annoying selves you are forced to deal with.

From your present clumped point of view, this afterlife may sound unnervingly distributed. But in fact it is wonderful. You can’t imagine the pleasure of stretching your redefined body across vast territories: ruffling your grasses and bending your pine branch and flexing an egret’s wings while pushing a crab toward the surface through coruscating shafts of light.

At some point the expansion of the universe will slow down, stop, and begin to contract, and at that moment the arrow of time will reverse. Everything that happened on the way out will happen again, but backward. In this way our life neither dies nor disintegrates, but rewinds.