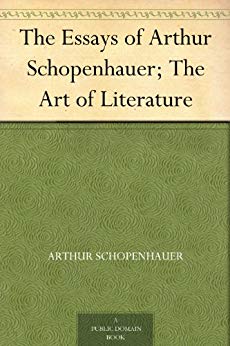 The Art of Literature

People talk about ‘first principles’ all the time – Schopenhauer really nailed the first principles of literature with this one. For anyone who reads and writes a lot, this is a refreshing take on what makes great writing and what doesn’t.

There are, first of all, two kinds of authors: those who write for the subject’s sake, and those who write for writing’s sake. While the one have had thoughts or experiences which seem to them worth communicating, the others want money; and so they write, for money.

Writing for money and reservation of copyright are, at bottom, the ruin of literature. No one writes anything that is worth writing, unless he writes entirely for the sake of his subject.

Again, it may be said that there are three kinds of authors. First come those who write without thinking. They write from a full memory, from reminiscences; it may be, even straight out of other people’s books. This class is the most numerous. Then come those who do their thinking whilst they are writing. They think in order to write; and there is no lack of them. Last of all come those authors who think before they begin to write. They are rare.

But even though the number of those who really think seriously before they begin to write is small, extremely few of them think about the subject itself: the remainder think only about the books that have been written on the subject, and what has been said by others.

Unless an author takes the material on which he writes out of his own head, that is to say, from his own observation, he is not worth reading.

There is no greater mistake than to suppose that the last work is always the more correct; that what is written later on is in every case an improvement on what was written before; and that change always means progress. Real thinkers, men of right judgment, people who are in earnest with their subject,—these are all exceptions only.

And, in general, the following rule may be laid down here as elsewhere: if a thing is new, it is seldom good; because if it is good, it is only for a short time new.

A book can never be anything more than the impress of its author’s thoughts; and the value of these will lie either in the matter about which he has thought, or in the form which his thoughts take, in other words, what it is that he has thought about

But in regard to the form, the peculiar character of a book depends upon the person who wrote it. It may treat of matters which are accessible to everyone and well known; but it is the way in which they are treated, what it is that is thought about them, that gives the book its value; and this comes from its author. If, then, from this point of view a book is excellent and beyond comparison, so is its author.

On the other hand, where the matter is accessible to everyone or very well known, everything will depend upon the form; and what it is that is thought about the matter will give the book all the value it possesses.

To form a provincial estimate of the value of a writer’s productions, it is not directly necessary to know the subject on which he has thought, or what it is that he has said about it; that would imply a perusal of all his works. It will be enough, in the main, to know how he has thought. This, which means the essential temper or general quality of his mind, may be precisely determined by his style.

Every mediocre writer tries to mask his own natural style, because in his heart he knows the truth of what I am saying. He is thus forced, at the outset, to give up any attempt at being frank or naïve—a privilege which is thereby reserved for superior minds, conscious of their own worth, and therefore sure of themselves.

And yet nothing is easier than to write so that no one can understand; just as contrarily, nothing is more difficult than to express deep things in such a way that every one must necessarily grasp them.

Simplicity has always been held to be a mark of truth; it is also a mark of genius. Style receives its beauty from the thought it expresses; but with sham-thinkers the thoughts are supposed to be fine because of the style. Style is nothing but the mere silhouette of thought; and an obscure or bad style means a dull or confused brain.

In the one case, every word, every touch of the brush, has a special purpose; in the other, all is done mechanically. The same distinction may be observed in music. For just as Lichtenberg says that Garrick’s soul seemed to be in every muscle in his body, so it is the omnipresence of intellect that always and everywhere characterizes the work of genius.

It would generally serve writers in good stead if they would see that, whilst a man should, if possible, think like a great genius, he should talk the same language as everyone else. Authors should use common words to say uncommon things.

Those writers who construct difficult, obscure, involved, and equivocal sentences, most certainly do not know aright what it is that they want to say: they have only a dull consciousness of it, which is still in the stage of struggle to shape itself as thought. Often, indeed, their desire is to conceal from themselves and others that they really have nothing at all to say. They wish to appear to know what they do not know, to think what they do not think, to say what they do not say.

It is always better to omit something good than to add that which is not worth saying at all.

If I see a man badly and dirtily dressed, I feel some hesitation, at first, in entering into conversation with him: and when, on taking up a book, I am struck at once by the negligence of its style, I put it away.

When one sees the number and variety of institutions which exist for the purposes of education, and the vast throng of scholars and masters, one might fancy the human race to be very much concerned about truth and wisdom. But here, too, appearances are deceptive. The masters teach in order to gain money, and strive, not after wisdom, but the outward show and reputation of it;

But the truth is that the dilettante treats his subject as an end, whereas the professional, pure and simple, treats it merely as a means. He alone will be really in earnest about a matter, who has a direct interest therein, takes to it because he likes it, and pursues it con amore. It is these, and not hirelings, that have always done the greatest work.

A library may be very large; but if it is in disorder, it is not so useful as one that is small but well arranged. In the same way, a man may have a great mass of knowledge, but if he has not worked it up by thinking it over for himself, it has much less value than a far smaller amount which he has thoroughly pondered.

Reading and learning are things that anyone can do of his own free will; but not so thinking.

Men of learning are those who have done their reading in the pages of a book. Thinkers and men of genius are those who have gone straight to the book of Nature; it is they who have enlightened the world and carried humanity further on its way.

Least of all should a man quite withdraw his gaze from the real world for the mere sake of reading; as the impulse and the temper which prompt to thought of one’s own come far oftener from the world of reality than from the world of books.

The works of all truly capable minds are distinguished by a character of decision and definiteness, which means they are clear and free from obscurity. A truly capable mind always knows definitely and clearly what it is that it wants to express, whether its medium is prose, verse, or music.

The presence of a thought is like the presence of a woman we love. We fancy we shall never forget the thought nor become indifferent to the dear one. But out of sight, out of mind! The finest thought runs the risk of being irrevocably forgotten if we do not write it down, and the darling of being deserted if we do not marry her.

If a man wants to read good books, he must make a point of avoiding bad ones; for life is short, and time and energy limited.

Repetitio est mater studiorum. Any book that is at all important ought to be at once read through twice; partly because, on a second reading, the connection of the different portions of the book will be better understood, and the beginning comprehended only when the end is known; and partly because we are not in the same temper and disposition on both readings.

Now, just as the sun cannot shed its light but to the eye that sees it, nor music sound but to the hearing ear, so the value of all masterly work in art and science is conditioned by the kinship and capacity of the mind to which it speaks.

The source of all pleasure and delight is the feeling of kinship. Even with the sense of beauty it is unquestionably our own species in the animal world, and then again our own race, that appears to us the fairest.

It is quite wrong to try to introduce into literature the same toleration as must necessarily prevail in society towards those stupid, brainless people who everywhere swarm in it. In literature such people are impudent intruders; and to disparage the bad is here duty towards the good; for he who thinks nothing bad will think nothing good either. Politeness, which has its source in social relations, is in literature an alien, and often injurious, element

The freedom of the press should be thus far restricted; so that when a man publicly proclaims through the far-sounding trumpet of the newspaper, he should be answerable for it, at any rate with his honor, if he has any; and if he has none, let his name neutralize the effect of his words.