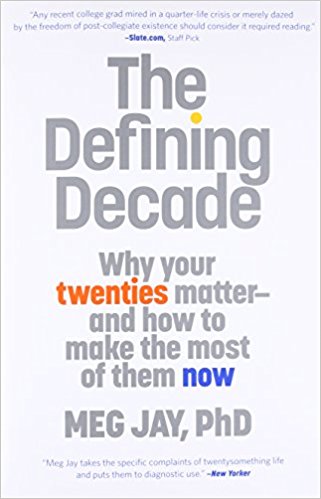 Practical advice from a psychologist who has drawn conclusions from conversations with her patients (who are in their 20’s and 30’s). Great book for someone in college or in their twenties to understand that freedom isn’t everything and good things take hard work and investment (including relationships and careers).

Many people focus on freedom and not living the corporate life, but then realize later that they should’ve invested in something to do with their life. People in their 30’s haven’t had experience with long-term relationships and settle for the first person as they feel pressured by the biological clock. Identity capital is the stuff that you invest in that makes you more attractive to the world: either degrees and jobs, or more intangibles like social skills and hard work. Spending too much time avoiding identity capital will cause problems in later years.

Much of chapter 3 is about “loose ties” and connections. Basically, it makes the case that many of the best opportunities come from loose connections, not the people you spend all the time with. She says that if you spend time with the same people, you become like them, and often the only way to get out or improve is through some random connection.

Chapter 4 talks about being satisfied with what you want. Facebook and other social media get in the way and cause people to have too many options, causing them to choose none of them. Things like settling down and getting married with kids are getting a bad reputation in younger years, yet that’s what a lot of people actually want to do. [The idea that many iGens are scared and risk averse is seeping into this book as well.]

In chapter 5, Meg talks about choosing something and acting on it. Many people want to keep options open because choosing something is ‘settling’ for something, but Meg encourages that you have to start somewhere. If you don’t, you’ll end up regretting it later on when it’s much harder to break in.

Many people don’t want to commit to marriage in their 20’s because it seems fun to not do that. However, once people reach 30, it seems to be a mad dash to find a partner and settle down as the biological clock ticks. Many people are aloof to commitment in their 20’s to realize that they wish they would’ve thought about marriage sooner. Another concept is that during this current time period is the oldest that people have ever gotten married.

Cohabitating is not good for healthy relationships. She poses the argument that “sliding” occurs as you go from dating, to sleeping over, to sleeping over frequently, to living together, to marriage, without much thought between the steps. She also says that you can choose your family by looking at your partners family. People have been picking families more than individuals for a very long time (think kings and queens).