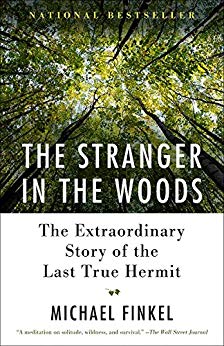 The Stranger in the Woods

On the surface, this is a headline story about a quiet man who lived alone in the woods for 27 years. But Finkel dives deeper, revealing some unexpected human truths along the way. If you’re into survivalist or hermit stuff, this is a must-read. If you’re not, this is still a very pleasant book.

“How long,” she asks, “have you been living in the woods?” “Decades,” he says. Vance would prefer something more specific. “Since what year?” she presses. Once more with the years – he has made the decision to talk and it’s important to him to speak strictly the truth. Anything else would be wasting words. He concentrates for a time gazing toward the windows, still black. He remembers something: “What year,” he asks, “was the Chernobyl nuclear plant disaster?” As soon as he says it, he wishes he hadn’t. The police officer is going to think he’s some lunatic environmental activist. It’s really just a news event, he happened to recall but assembling all the language needed to clarify this seems impossible. So he lets it go. Vance thumbs her phone. Chernobyl was in 1986. “That’s when I took to the woods,” says Knight. Twenty-seven years ago.

“Have you ever been sick?” asks Vance. “No,” says Knight. “You need to have contact with other humans to get sick.”“When is the last time you had contact with another human?” He never had physical contact, Knight answers. But sometime in the 1990s he encountered a hiker while walking in the woods. “What did you say?” asked Vance. “I said Hi,” Knight replies. Other than that single syllable, he insists, he had not spoken with or touched another human being until this evening, for 27 years.

All summer, at barbecues and campfires, you hear a dozen similar tales: propane tanks, batteries and books are the constants, but also lost are an outdoor thermometer, a garden hose, a snow shovel and a case of Heineken beer. One couple opened their place for the season and discovered that there was no mattress on one of the bunk beds.

We have made a connection, or at least the awkwardness of our introduction had softened. We began to converse somewhat normally, though never at a rapid clip. Knight seemed to weigh the precision of every word he used, careful as a poet. Even his handwritten letters had gone through at least one rough draft, he said, mostly to remove unnecessary insults.

Knight had created from the chaos a living room-sized clearing, completely invisible. A few steps away, protected by a natural Stonehenge of boulders and a thicket of hemlocks, tree branches linked overhead to form a trellis masking his sight from the air. This was why Knight’s skin was so pale: he’d resided in perpetual darkness.

The magazines had been bound with electrical tape into thick bundles that night referred to as ‘bricks’ elsewhere. There were buried bricks of People; of Vanity Fair; of Glamour; of Playboy. Knight had recycled his old reading material as sub-flooring, creating a platform that was perfectly level and also permitted decent drainage of rainwater.

One’s desire to be alone, biologists have found, is partially genetic and to some degree measurable. If you have low levels of the pituitary peptide oxytocin (sometimes called the master chemical of sociability) and high quantities of the hormone vasopressin, which may suppress your need for affection, you tend to require fewer interpersonal relationships.

Some hermits have tolerated steady streams of visitors or lived in cities or holed up in university laboratories. But you can take virtually all the hermits in history and divide them into three general groups to explain why they hid: protesters, pilgrims, pursuers.

He was never once bored. It wasn’t sure, he said, that he even understood the concept of boredom. It applied only to people who felt they had to be doing something all the time, which from what he’d observed was most people.

It seemed that Knight could immediately recall anything he had ever read or seen, though he insisted that he did not have a photographic memory. He just remembered it all. “Both Adams and Jefferson died on the Fourth of July in 1826,” he added. He wondered if modern society, with its flood of information and tempest of noise, was only making us dumber.

In 1988 a cave explorer … volunteered for an extreme experiment: to live alone in an underground cavern in southern France without a clock for one hundred and eleven days, monitored by scientists who wished to study the human body’s natural rhythms in the absence of time cues. For a while, she settled into a pattern of 30 hours awake and 20 hours of sleep. She described herself as being “psychologically completely out of phase, where I no longer know what my values are or what is my purpose in life.” When she returned to society, her husband later noted, she seemed to have an emptiness inside her that she was unable to fully express.

Even when you’re alone and look in the mirror, you’re acting. Which is one reason Knight never kept a mirror in his camp. He let go of all artifice. He became no one and everyone. The past (the land of wistfulness) and the future (the place of yearning) seemed to evaporate. Knight simply existed, for the most part, in the perpetual now.

But isolation has a razor’s edge. For others, for those who do not choose to be alone, for prisoners and hostages a loss of one’s socially created identity can be terrifying – a plunge into madness. Psychologists call it ontological insecurity.

Now he is being tossed into public life and he’s frightened. It’s not the big things, like getting a job or re-learning to drive, that worry him. But the little ones like eye contact and gestures and emotions, all of which can be badly misinterpreted.

But he’s still not entirely sure. He tells me he has a plan. He is going to wait for the first really frigid day, probably in late November, six or so months from now and he will set out into the forest wearing very little clothing. He will walk as deep into the woods as he can. Then he is going to sit down and allow nature to take care of him. He will freeze himself to death.