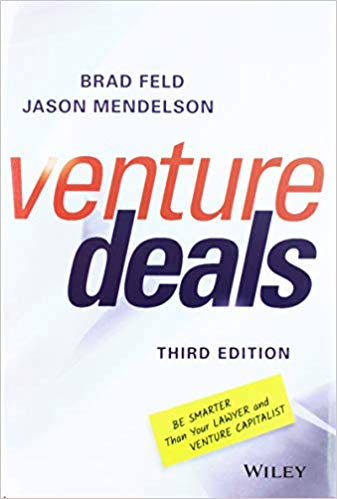 Great reference material for raising capital. Picked this up as I was helping build a cap table and it was helpful to walk through concepts / typical procedures.

Over the past 50 years, the art of the term sheet has evolved and expanded, reaching its current eight (or so) page literary masterpiece. These eight pages contain a lot more than “We’d like to invest $X in your company and get Y% of it,” but, as you’ll learn, there really are only two key things that matter in the actual term sheet negotiation—economics and control.

When we meet people who say they are “trying to raise money,” “testing the waters,” or “exploring different options,” this not only is a turnoff but also often shows they’ve not had much success.

Work hard on the presentation flow and format. In this case, form matters a great deal—it’s amazing how much more positive a response is to well-designed and well-organized slides, especially if you have a consumer-facing product where user experience will matter a lot for its success.

We haven’t read a business plan in over 20 years. Sure, we still get plenty of them, but it is not something we care about as we invest in areas we know well, and as a result we much prefer demos and live interactions.

You can’t predict your revenue with any level of precision, but you should be able to manage your expenses exactly to plan. Your financials will mean different things to different investors. In our case, we focus on two things: (1) the assumptions underlying the revenue forecast (which we don’t need a spreadsheet for—we’d rather just talk about them) and (2) the monthly burn rate or cash consumption of the business.

Other VCs are much more spreadsheet driven. Some firms (usually those with associates) may go so far as to perform discounted cash flow analyses to determine the value of your business. Some will look at every line item and study it in detail.

While price per share is the ultimate measure of what is being paid for the equity being bought, price is often referred to as valuation

When a VC says, “I’ll invest $5 million at a valuation of $20 million,” the VC usually means the post-money valuation. In this situation, the VC’s expectation is that a $5 million investment will buy 25% of a $20 million post-money company.

Both the company and the investor will want to make sure the company has sufficient equity (or stock options) reserved to compensate and motivate its workforce. This is also known as the employee pool or option pool. The bigger the pool the better, right? Not so fast. Although a large option pool will make it easier to give good option packages to new hires while it being less likely that the company will run out of available options, the size of the pool is taken into account in the valuation of the company.

Let’s stay with our previous example of a $5 million investment at $20 million pre-money. Assume that you have an existing option pool that has options representing 10% of the outstanding stock reserved and unissued. The VCs suggest that they want to see a 20% option pool. In this case, the extra 10% will come out of the pre-money valuation, resulting in an effective pre-money valuation of $18 million.

There is one type of financing—the bridge loan—in which warrants are commonplace. A bridge loan occurs when an investor is planning to do a financing, but is waiting for additional investors to participate. In the bridge loan scenario, the existing investor will make the investment as convertible debt, which will convert into equity at the price of the upcoming financing. Since the bridge loan investor took additional risk, he generally gets either a discount on the price of the equity (usually up to 20%) or warrants that effectively grant a discount (again usually up to 20%, although occasionally more).

In this language, a certain multiple of the original investment per share is returned to the investor before the common stock receives any consideration. For many years, a 1× liquidation preference, or simply the amount of money invested, was the standard.

Fully participating stock will receive its liquidation preference (typically 1×, but it can be more) and then share in the liquidation proceeds on an as-converted basis, where “as-converted” means as if the stock were converted into common stock based on its conversion ratio.

No participation indicates that the stock doesn’t participate after receiving their liquidation preference. In this case, also known as a “simple preferred” or “nonparticipating preferred,” the investor has a choice—they can either get their money back or they can convert into common stock and get proceeds equal to their percentage of ownership of the company on an as-converted basis.

It is important to understand the impact of the size of the pool on the valuation of the financing. As with pre-money and post-money valuations, VCs often sneak in additional economics for themselves by increasing the amount of the option pool on a pre-money basis.

Full ratchet antidilution means that if the company issues shares at a price lower than the price for the series with the full ratchet provision, then the earlier round price is effectively reduced to the price of the new issuance.

Outside board members are usually compensated with stock options—just like key employees—and are often invited to invest money in the company alongside the VCs. Usually you see these outsiders receive options to purchase 0.25% to 0.5% of the company that vest over two to four years.

Protective provisions are effectively veto rights that investors have on certain actions by the company.

[Types of drag-along] The first is where the preferred investors drag-along the common shareholders. This agreement gives the preferred investors the ability to force, or drag along, all of the other investors and the founders to do a sale of the company, regardless of how the folks being dragged along feel about the deal… More recently, a second flavor of drag-along has come to exist and it is one that we prefer. In this version, if a founder leaves the company, their stock will be dragged along by all other classes of stock. In other words, a departed founder (who may or may not harbor ill will toward the company) cannot play the hold out on voting matters.

In all the VC deals we’ve ever seen, the preferred shareholders have the right—at any time—to convert their stake into common stock.

Convertible debt is just that: debt. It’s a loan. The loan will convert to equity (preferred stock, usually) at such time as another round is raised. The conversion usually includes some sort of discount on the price to the future round.

To attract seed-stage investors, consider a convertible debt deal with two additional features: a reasonable time horizon on an equity financing and a forced conversion if that horizon isn’t met, as well as a floor, not a ceiling, on the conversion valuation.

A warrant is an option to purchase a certain number of shares at a predetermined price. But how do you figure out the number of warrants and the price that the warrants will be at?

We’ve observed some companies end up being stranded after a crowdfunding round. These companies either can’t, or don’t, raise enough money in the crowdfunding round and find themselves without money and with a noncommitted investor syndicate. Often, these companies are not mature enough to attract a VC financing and end up in a situation where they are too early for VCs, yet don’t have meaningful support from their existing crowd of investors.

There are only three things that matter when negotiating a financing: achieving a good and fair result, not killing your personal relationship getting there, and understanding the deal that you are striking.

Don’t ask a VC for a nondisclosure agreement (NDA). Although most VCs will respect how unique your idea, innovation, or company is to you, it’s likely that they’ve seen similar things due to the sheer number of business plans that they get.

If you are not going to raise any VC or angel money, an S Corp is the best structure as it has all the tax benefits and flexibility of a partnership—specifically a single tax structure versus the potential for the double tax structure of a C Corp—while retaining the liability protection of a C Corp.

If you are going to raise VC or angel money, a C Corp is the best (and often required) structure. In a VC-/angel-backed company, you’ll almost always end up with multiple classes of stock, which are not permitted in an S Corp. Since a VC-/angel-backed company is expected to lose money for a while (in most cases that’s the expectation for why you are raising money in the first place) the double taxation issues will be deferred.