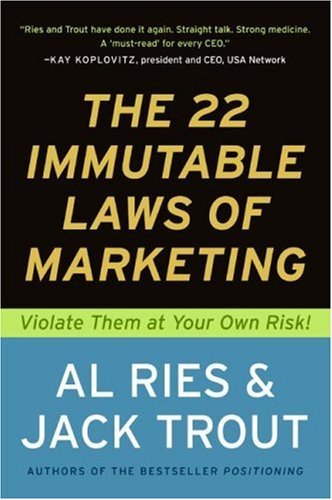 The 22 Immutable Laws of Marketing

There's a reason why this is one of the most-cited marketing books: it's good. I've read a few marketing books now and they converge on many of the same topics. This book is a great overview of those topics that matter.

1 The Law of Leadership: It’s better to be first than it is to be better.

The basic issue in marketing is creating a category you can be first in. It’s the law of leadership: It’s better to be first than it is to be better. It’s much easier to get into the mind first than to try to convince someone you have a better product than the one that did get there first.

The law of leadership applies to any product, any brand, any category.

People tend to stick with what they’ve got. If you meet someone a little better than your wife or husband, it’s really not worth making the switch, what with attorneys’ fees and dividing up the house and kids.

Regardless of reality, people perceive the first product into the mind as superior. Marketing is a battle of perceptions, not products.

2 The Law of the Category: If you can’t be first in a category, set up a new category you can be first in.

Now, is Amelia known as the third person to fly the Atlantic Ocean solo, or as the first woman to do so?

This is counter to classic marketing thinking, which is brand oriented: How do I get people to prefer my brand? Forget the brand. Think categories. Prospects are on the defensive when it comes to brands. Everyone talks about why their brand is better. But prospects have an open mind when it comes to categories. Everyone is interested in what’s new. Few people are interested in what’s better.

The law of the mind follows from the law of perception. If marketing is a battle of perception, not product, then the mind takes precedence over the marketplace.

The single most wasteful thing you can do in marketing is try to change a mind.

All that exists in the world of marketing are perceptions in the minds of the customer or prospect. The perception is the reality. Everything else is an illusion.

Most marketing mistakes stem from the assumption that you’re fighting a product battle rooted in reality. All the laws in this book are derived from the exact opposite point of view.

Only by studying how perceptions are formed in the mind and focusing your marketing programs on those perceptions can you overcome your basically incorrect marketing instincts.

People are seldom, if ever, wrong. At least in their own minds.

What makes the battle even more difficult is that customers frequently make buying decisions based on second-hand perceptions. Instead of using their own perceptions, they base their buying decisions on someone else’s perception of reality. This is the “everybody knows” principle.

5 The Law of Focus: The most powerful concept in marketing is owning a word in the prospect’s mind.

A company can become incredibly successful if it can find a way to own a word in the mind of the prospect. Not a complicated word. Not an invented one. The simple words are best, words taken right out of the dictionary.

You don’t have to be a linguistic genius to find a winner. Prego went against leader Ragu in the spaghetti sauce market and captured a 27 percent share with an idea borrowed from Heinz. Prego’s word is thicker.

The essence of marketing is narrowing the focus. You become stronger when you reduce the scope of your operations. You can’t stand for something if you chase after everything.

You can’t narrow the focus with quality or any other idea that doesn’t have proponents for the opposite point of view. You can’t position yourself as an honest politician, because nobody is willing to take the opposite position (although there are plenty of potential candidates).

6 The Law of Exclusivity: Two companies cannot own the same word in the prospect’s mind.

What’s the biggest problem people have with batteries? They go dead at the most inconvenient times. So what’s the No. 1 battery attribute? Long-lasting, of course. If long-lasting is what people want, that’s what we should advertise. Right? Wrong. [Only market a word if you can be first]

Some years ago Burger King started down this slippery slope from which it has never quite recovered. A market study showed that the most popular attribute for fast food was “fast” (no big surprise there). So Burger King did what most red-blooded marketers do. It turned to its advertising agency and said, “If the world wants fast, our advertising should tell them we’re fast.” What was overlooked in the research was that McDonald’s was already perceived as being the fastest hamburger chain in the country. Fast belonged to McDonald’s.

7 The Law of the Ladder: The strategy to use depends on which rung you occupy on the ladder.

8 The Law of Duality: In the long run, every market becomes a two-horse race.

9 The Law of the Opposite: If you’re shooting for second place, your strategy is determined by the leader.

You must discover the essence of the leader and then present the prospect with the opposite. (In other words, don’t try to be better, try to be different.) It’s often the upstart versus old reliable.

Time built its reputation on colorful writing. So Newsweek turned the idea around and focused on a straightforward writing style: “We separate facts from opinions.” In other words, Newsweek puts its opinions in the editorial columns, not in the news columns.

Note:Must not focus on collaboration

10 The Law of Division: Over time, a category will divide and become two or more categories.

11 The Law of Perspective: Marketing effects take place over an extended period of time.

There is no evidence that couponing increases sales in the long run.

12 The Law of Line Extension: There’s an irresistible pressure to extend the equity of a brand.

By far the most violated law in our book is the law of line extension. What’s even more diabolical is that line extension is a process that takes place continuously, with almost no conscious effort on the part of the corporation. It’s like a closet or a desk drawer that fills up with almost no effort on your part.

Why is Sears, Roebuck in trouble? Because the company tried to be all things to all people. Sears was big in hard goods, so it went into soft goods and then fashion. The company even hired Cheryl Tiegs. (Do fashion models really buy their miniskirts at Sears?)

13 The Law of Sacrifice: You have to give up something in order to get something.

The law of sacrifice is the opposite of the law of line extension. If you want to be successful today, you should give something up. There are three things to sacrifice: product line, target market, and constant change.

Marketing is a game of mental warfare. It’s a battle of perceptions, not products or services. In the mind of the prospect, Federal Express is the overnight company.

Take the retail industry. Which retailers are in trouble today? The department stores. And what’s a department store? A place that sells everything. That’s a recipe for disaster. [Great call - book written in 1993]

Look at cigarette advertisements, especially old cigarette ads. They invariably show both a man and a woman. Why? In an age when most smokers were men, cigarette manufacturers wanted to broaden their market. We got the men, let’s go out and get the women, too. So what did Philip Morris do? It narrowed the focus to men only. And then it narrowed the focus even more to a man’s man, the cowboy. The brand was called Marlboro. Today, Marlboro is the largest-selling cigarette in the world. In the United States, Marlboro is the largest-selling cigarette among men and women.

14 The Law of Attributes: For every attribute, there is an opposite, effective attribute.

You can’t predict the size of a new attribute’s share, so never laugh.

15 The Law of Candor: When you admit a negative, the prospect will give you a positive.

First and foremost, candor is very disarming. Every negative statement you make about yourself is instantly accepted as truth.

Some years ago, Scope entered the mouthwash market with a “good-tasting” mouthwash, thus exploiting Listerine’s truly terrible taste. What should Listerine do? It certainly couldn’t tell people that Listerine’s taste “wasn’t all that bad.” That would raise a red flag that would reinforce a negative perception. Things could get worse. Instead, Listerine brilliantly invoked the law of candor: “The taste you hate twice a day.”

16 The Law of Singularity: In each situation, only one move will produce substantial results.

17 The Law of Unpredictability: Unless you write your competitors’ plans, you can’t predict the future.

18 The Law of Success: Success often leads to arrogance, and arrogance to failure.

Brilliant marketers have the ability to think like a prospect thinks. They put themselves in the shoes of their customers. They don’t impose their own view of the world on the situation.

19 The Law of Failure: Failure is to be expected and accepted.

Marketing decisions are often made first with the decision maker’s career in mind and second with the impact on the competition or the enemy in mind. There is a built-in conflict between the personal and the corporate agenda.

While the 3M system works, in theory the ideal environment would allow managers to judge a concept on its merits, not on whom the concept would benefit.’

20 The Law of Hype: The situation is often the opposite of the way it appears in the press.

21 The Law of Acceleration: Successful programs are not built on fads, they’re built on trends.

When everybody has a Ninja turtle, nobody wants one anymore.

22 The Law of Resources: Without adequate funding an idea won’t get off the ground.

You’ll get further with a mediocre idea and a million dollars than with a great idea alone.

Unlike a consumer product, a technical or business product has to raise less marketing money because the prospect list is shorter and media is less expensive. But there is still a need for adequate funding for a technical product to pay for brochures, sales presentations, and trade shows as well as advertising.

The law of leadership is tough for many to swallow. Most people want to believe they got to the top by being better, not by being first.

The law of sacrifice could cause you problems. Offering everything for everybody is deeply ingrained in most organizations.