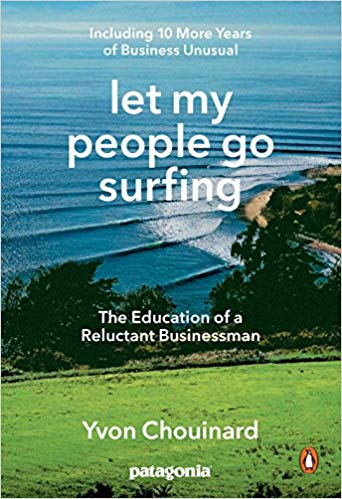 I knew Patagonia was an environmentally friendly company, but this book really shows their focus on it from the beginning. Everything in their business model is built with sustainability in mind – from the way they design clothes, to the way they revolutionized daycare, to the way they distribute profits. Wasn’t what I expected, but it’s evident that they care about the world and do everything they can do help it.

…we are on the brink of an environmental collapse. Our society lacks the will to take action. We’re collectively paralyzed by apathy, inertia, or lack of imagination. Patagonia exists to challenge conventional wisdom and present a new style of responsible business. We believe the accepted model of capitalism that necessitates endless growth, and deserves the blame for the destruction of nature, must be displaced.

I excelled in athletics like baseball and football. But when it came time to perform while people were watching I would fumble the ball. I learned at an early age that it’s better to invent your own game. Then you can always be a winner.

I found gas money by diving into trashcans and redeeming soda pop bottles. One time, I found an entire freezer load of partially-frozen meat. For the next few years I worked on my equipment in the winter months, spent April to July on the walls of Yosemite, headed out of the heat of summer for the high mountains of Wyoming, Canada, and the Alps, and then back to assembly in the fall until the snow fell in November.

We were hanging out in camp one day, when a car full of ‘tough girls’ drove up and the driver threw out a beer can. Melinda ran over and told him to pick it up. They gave her the finger. So with her bare hands Melinda ripped off their license plate and turned them into the rangers. I was smitten. When we married in 1970, Melinda was teaching art in high school. But she soon became involved in the business.

I had no business experience so I started asking people for free advice. I just called up presidents of banks and said, “I’ve been given these companies to run. And I’ve no idea what I’m doing. I think someone should help me.” And they did. If you just ask people for help, if you just admit that you don’t know something, they will fall all over themselves trying to help.

I wanted to distance myself as far as possible from those pasty-faced corpses in suits I saw an airline magazine ads. If I had to be a businessman, I was going to do it on my own terms. One of my favorite sayings about entrepreneurship is: “If you want to understand the entrepreneur study the juvenile delinquent. The delinquent is saying with his actions, ‘this sucks, I’m going to do my own thing’.”

…because I knew the American way of doing business offered only one of many possible routes. I didn’t find any American company we could use as a role model. Either it was too large and conservative for us to relate to, or it didn’t have the same values.

I’ve always thought of myself as an 80 percenter. I like to throw myself passionately into a sport or activity until I reach about an 80 percent proficiency level. To go beyond that requires an obsession and degree of specialization that doesn’t appeal to me. Once I reach that 80 percent level I like to go off and do something totally different.

Using the capabilities of this new underwear as the basis of a system, we became the first company to teach the outdoor community, through essays in our catalog, the concept of layering. This approach involves wearing an inner layer against the skin for moisture transport, a middle layer of pile for insulation, and then an outer shell layer for wind.

No child care discussion starts without high drama – we agreed to pay them to stay home and nurse their infants, sweetening the pot by telling them the fathers could have leave to. As the years roll by and some of our original daycare kids have become parents and employees, our policies have become federal law.

We look to the Iroquois and their seven generation planning, and not to corporate America, as models of stewardship and sustainability. As part of their decision process, the Iroquois had a person who represented the seventh generation in the future. If Patagonia could survive this crisis, we had to begin to make all our decisions as though we would be in business for 100 years. We would grow only at a rate we could sustain for that long.

[For a trip] to Tahiti or Indonesia, they have to take six to 10 boards because they’re going to break at least half of them. You call that good quality? “But everyone’s boards break like that,” he answered. We realized that durability was not among the primary criteria for the overall quality of surfboards. In fact, surfboards were just a fashion item, because naive young victims often insist on buying the same style boards as the world champion. You can imagine how well that works for them. Once I persuaded Fletcher to make a better surfboard, he had to identify all the criteria that define quality and performance as they pertain to surfboards.

These conditions create a society of product consumers not owners – and there’s a difference. Owners are empowered to take responsibility for their purchases, from proper cleaning to repairing, reusing and sharing. Consumers take, make, dispose, and repeat – a pattern that is driving us toward ecological disaster.

A master in the art of living draws no sharp distinction between his work and his play; his labor and his leisure; his mind and his body; his education and his recreation. He hardly knows which is which. He simply pursues his vision of excellence through whatever he is doing and leaves others to determine whether he is working or playing. To himself, he always appears to be doing both. – L.P. Jacks

58 percent of our employees in Ventura are women, and many occupy high-level management positions. Our center helps us retain our skilled moms by making it easier for women to progress in their careers. Both moms and dads are motivated to be more productive.

The so-called “green revolution” of modern agro-business, which relies on petroleum, is completely non-sustainable. David Pimentel at Cornell University has estimated that if all the world’s ate and farmed the way the United States does, we would exhaust all known global fossil fuel reserves in just over seven years.

And yet we fail to see our own vulnerability in the demise of a stable planet. In fact, just the opposite occurs as corporations benefit from natural disasters by fulfilling government contracts and thereby privatizing public services while boosting their bottom line. The root of the problem is that neither the government nor business uses full cost accounting in its use of resources. In fact the government’s indicator for the health of the economy is the GDP, gross domestic product, which measures the economic health of a nation by the value of the quantity of goods produced, not by the cleanliness and availability of air and water, the health of soil, the biodiversity of ecosystems, or the temperature of oceans – the elements that support and sustain the natural resources necessary to build products these corporations sell.

I would summarize the elements of this philosophy as follows. 1. Lead an examined life. 2. Clean up our own act. 3. Do our penance. 4. Support civil democracy. 5. Do good. 6. Influence other companies.

These amounts may not seem like much, but the important point is that each time we tried to do the right thing for the environment regardless of the cost to us we ended up saving money. These cost savings were only the tip of the iceberg. Reusing cardboard boxes in the mail room saves a thousand dollars a year. Using our recycled reused computer paper on the child care centers diaper changing tables saves twelve hundred dollars a year. And the list goes on.