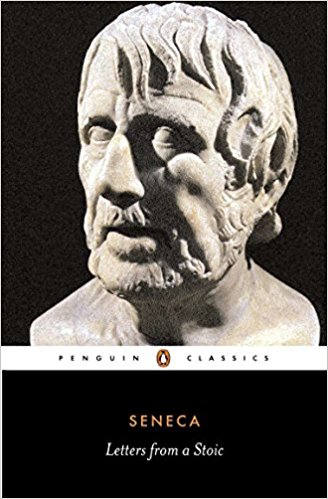 Letters from a Stoic

Incredible book, I would recommend this to anyone and everyone that wants to hear some truths about how humans live and how to be happy. Effective explanatory text of stoic philosophy that feels like moral and spiritual good is just seeping from the pages. Seneca was a trusted adviser to Nero (a Roman Empire) and this book contains letters to (presumably) an imaginary person outlining what Seneca has taught Nero.

The stoic philosophy is as follows:

“Nothing, to my way of thinking, is a better proof of a well ordered mind than a man’s ability to stop just where his is and pass some time in his own company.”

“Certainly you should discuss everything with a friend; but before you do so, discuss in your mind the man himself.”

“For delight in bustling about is not industry – it is only the restless energy of a hunted mind.”

“Philosophy calls for simple living, not for doing penance, and the simple way of life need not be a crude one”

“…who when asked what was the object of all the trouble he took over a piece of craftsmanship when it would never reach more than a very few people, replied: ‘A few is enough for me; so it one; and so is none.” – Democritus

“What fortune has made yours is not your own” – Publilius

Difference between Epicurean (main philosophy outside Stoisicm at the time) and Stoics: “…our wise man feels his troubles but overcomes them, while their wise man does not even feel them”

Seneca believes in the concept that truths in this world are everyone’s property, not to be kept to certain people

“Nature’s wants are small, while those of opinion are limitless”

“by something you are pursuing is natural or quite unseeing, ask yourself whether it is capable of coming to rest at any point; if after going a long way there is always something remaining farther away, be sure it is something not natural”

Seneca takes a few days each month to live in poverty to remind himself that it’s not that bad. Being afraid of losing wealth is one of the worst things.

Seneca has a strong position on travel: it is not valuable if you are using it to distract your mind or trying to flee from yourself.

Seneca preaches the idea that while learning philosophy and pursuing wisdom is the way to the good life, he looks down on people that only quote other people. You must have original thoughts and create things.

Seneca preached only praising people for what is truly theirs: their soul. He finds it foolish to praise people for things that can be taken away or moved to another person

“It is the person who’s awakened who recounts his dream, and acknowledging one’s failings is a sigh of health”

Seneca spends a paragraph comparing mental health to physical health. He says that if we were physically sick, we wouldn’t still be working but instead doing everything to improve our health. Applying this to mental health, if we are not completely healthy, we shouldn’t focus our time on work and other things, but instead getting healthy.

On the fact that we shouldn’t fear death: “What does it matter, after all, whether you cease to be or never begin, when the result of either is that you do not exist?”

“Let a man retire and the common crowd will think of him as leading a life apart, free of all cares, self-contented, living for himself, when in fact not one of these blessings can be won by anyone other than the philosopher”

Seneca believes that being busy gets in the way of pursuing wisdom and reality. This spoke to me in particular because at the current point in my life, I’m going into banking soon which is known to occupy time with a lot of busy work.

“So it is with the love of money, the love of power and the other maladies that affect the minds of men – you may be sure that it is when the abate and give every appearance of being cured that they are at their most dangerous”

On friends dying: “you have buried someone you loved. Now look for someone to love. It is better to make good the loss of a friend than to cry over him”

“An ordinary journey will be incomplete if you come to a stop in the middle of it, or anywhere short of your destination, but life is never incomplete if it is an honorable one. At whatever point you leave life, if you leave it in the right way, it is whole”

“A man is unhappy as he has convinced himself he is”

“But no doctor can refuse his patient those other, greater and surer pleasures, the pleasures of mind and spirit”

“Truth will never pall on someone who explores the world of nature, wearied as a person will be by the spurious things”

Letter LXXXIII is one to read and read again (pg 140)

Seneca preaches some pretty practical stuff at parties: drinking is bad in excess, and finding joy in it does not lead to a good life

“Well, I have no respect for any study whatsoever if its end is the making of money”

“Why ‘liberal studies’ are so called is obvious: it is because they are the ones considered worthy of a free man”

Seneca preaches that philosophy is significantly better than anything else, including other topics of science

“Virtue will not bring herself to enter the limited space we offer her; something of great size requires plenty of room. Let everything else be evicted, and your heart completely opened to her”

“What about thinking how much time you lose through constantly being taken up with official matters, private matters or ordinary matters, through sleep, through ill health? Measure your life: it just does not have room for so much”

On philosophy being the only thing that is truly earned: “For if they had made philosophy a blessing given to all and sundry, if we were born in a state of moral enlightenment, wisdom would have been deprived of the best thing about her – that she isn’t one of the things which fortune either gives us or doesn’t”

Seneca is proud of philosophy and its ability to make other things unnecessary. What need is an engineer if you can instead learn to live without the luxuries of life? Because nothing is needed, the only thing that matters is understanding that nothing is needed, IE philosophy. More on pg 166, Letter XC

Seneca is a believer in living with nature. He mentions that we might complain about not having a shade to save our skin, and his response is that we didn’t have it for years and did just fine. More on pg 167, Letter XC

On philosophy (“he” in this passage): “He has condemned pleasures an inseparable element of which is subsequent regret, has commended the good things which will always satisfy, and for all to see has made the man who has no need of luck the luckiest man of all, and the man who is master of himself the master of all”

[Seneca also recognized Black Swan events:] “One is not surprised, though, that there were never any advance fears of such an expected, virtually unheard of catastrophe, considering that there was no precedent for it”

In every instance where there is pleasure, there is fear of losing it. “In the absence of any enemy we suffer all that an enemy might wreck on us”

Letter CIV (pg 184) has a trend that travel is not everything.

On pg 199 (Letter CVII) Seneca talks about all of life’s variables and preaches to find peace in the spirit.

“For fate the willing leads, the unwilling drags along”

“The more the mind takes in the more it expands”

People recognize the truth when they hear it: “It is easy enough to arouse in a listener a desire for what is honorable; for in every one of us nature has laid the foundations or sown the seeds of the virtues”

Seneca talks about removing excess things from his life. In some cases he removes things for a time but brings them back: “…in these cases in which I have ceased to practice total abstinence, I succeed in observing a limit, which is something hardly more than a step removed from total abstinence (and even perhaps more difficult – with some things less effort of will is require to cut them out altogether than to have recourse to them in moderation)”

Seneca talks about how styles of writing can be generational. Groups of people make mistakes then the entire population accepts them. That’s how language and style evolve.

Seneca preaches that luxuries are unnatural: “Is it not living unnaturally to hanker after roses during the winter, and to force lilies in midwinter by taking the requisite steps to change their environment and keeping up the temperature with hot water heating?”

“Vices are manifold, take countless different forms and are incapable of classification”