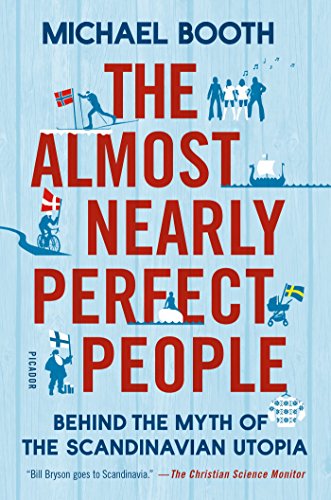 A look into the lives of Scandinavian countries and people. Helpful both to understand what contributes to their successes (happiness, equality) and also to contrast the differences between Norway, Sweden, Finland, Denmark and Iceland.

In fact, Denmark was not without rivals to the title of “peachyist place to live.” As the U.N. report suggested, each of the Nordic countries has its own particular claim to life quality supremacy. Shortly after the U.N. report was published, Newsweek announced that it was Finland, not Denmark, that has the best quality of life.

You see, in a roundabout way Denmark’s losses were her making. Their greatly reduced circumstances bound the Danes together more tightly as a tribe than any of the other Nordic countries. As historian T.K. Dery writes about the accession of Norway to Sweden, the Danish king and people resigned themselves to the loss as a common misfortune which drew them together.

Over there is Danish television’s golden girl, a presenter of the evening show. She’s talking to a roofer. Behind me is a member of parliament, earnestly debating Denmark’s chances in some handball tournament or other with the man who grows the strawberries in these parts. The Danes do seem to have an uncommon facility to get on with each other regardless of age, class or outlook.

It is tricky and costly to check that high level consultants, architects, I.T. technicians or chemical engineers are working as they should. So trust becomes that much more important, which is one reason why high trust societies such as Denmark, Finland and Sweden excel in advance industries like pharmaceuticals and electronics, and attract foreign companies operating in these fields.

The total direct and indirect burden on the Danish taxpayer ranges from 58 to 72 percent. Put another way the Danes are allowed to decide the fate of one third of the money they earn. Put it yet another way, in Denmark even if you work in the private sector you work for the state up until at least Thursday morning.

Though Denmark’s National Debt is relatively modest at half the EU average, according to a recent IMF warning, the Danish people have personally indebted themselves up to their Gucci glasses. Today, Danish households have the highest ratio of debt-to-income of any country in the western world. The Danes owe, on average, three hundred and ten percent of their annual income, more than double that of the Portuguese or Spanish and quadruple that of the Italians.

The bookshop was “Bo Hendler” or book dealer. Clearly affronted by its neighbors shameless self promotion, one retailer had simply taken to naming itself “Number 16”. Another, wary of accusations of hubris, had plumped simply for “Shopan” or “the shop”. These retailers were not merely lacking in marketing skills, they defiantly renounced all conventional notions.

Hygge is a highly effective way to skirt controversial topics or sweep unhappy memories under the carpet.

Then they ask us at the end of the year whether those expectations were met, and because our expectations are so extremely low at the beginning of the year they tend to get met more easily. Could that be the secret of the Danes contentedness? Low expectations? It is true that when asked how they expect the next year to pan out, the Danes do typically expect less than the rest of us.

With that in mind I had a standard question that I asked most of my interviewees: “What are your fears for the future of Denmark?” One word cropped up more than any other in their responses: complacency.

The collapse of Lehman Brothers in late 2008 exposed Iceland’s debts, which had one point was said to be around 850% of GDP compared with the United States’ 350%.

On the other hand, knowing they had a year to catch their quota, it was hoped that the fishermen would take fewer risks. The real germ of the economic crisis is to be found a little later, in 1991, when the fishermen were given permission to trade the quotas and use future catches as collateral to borrow money. As one commentator put it, “one decision two decades ago destroyed the country.” [Iceland]

For example, the influence of the American diet has seen the Okinawans go from being the healthiest, longest-living people in the world to having the highest rates of obesity and diabetes in the country. Could America be the real influence that turned the Icelanders into a nation of irresponsible high rollers? If so, how do you like them apples, Michael Lewis? Terry Gunnel pointed out that for the last half century American culture has had as great an influence on Iceland as anything.

By stepping out wearing their expensive, and to some eyes perhaps silly, regional costumes, the Norwegians were sending a signal to one another. “I am like you. We share the same history the same values and I’m prepared to expend vast amounts of money, go to significant sartorial lengths and risk public humiliation in order to. ”

The fact is there is much less far from the mainstream than many are willing to accept. Whilst most Norwegians are not racist, some hold deeply troubling views. Norway does need to ask itself some very serious questions about why the world’s worst single gunman atrocity happened here in this apparently peaceful and harmonious country where nothing bad ever happens.

But Norway has tended to mind its own business, separated by the great physical barriers of the mountains and the sea. This decentralization, coupled with a heightened respect for their natural surroundings, are two of the keys to understanding the Norwegians.

One Norwegian I spoke to about this…likened the way the Norwegians are defined by their landscape to the way the French are defined by their culture. It is extraordinarily important for Norwegians to tell each other on a Monday morning that they have been out skiing, mountain walking, and so on, he said. Norway has this fascination with having mountain cabins and ocean cabins, this fascination with nature.

More than a million of them live on money from the state, the majority of them pensioners but also a sizeable number (340,000) on disability, unemployment or sickness benefits, proportionately the largest number in Europe. The picture is equally worrying for Norwegian children who ranked below the European average in terms of literacy, mathematics and sciences, with the trend worsening over the last 10 years.

According to a report I read on an English language Finnish news site, hundreds of thousands of Finns are hooked on the anxiety and insomnia drug benzodiazepine. More worryingly still, they have the third highest rate of gun ownership in the world (after the United States and Yemen), the highest murder rate in western Europe, and are famously hard and reckless drinkers as well as enthusiastic suicidalists.

Finland is a very primitive culture, but that is a positive thing for me. They have a very simple approach to human life. Are you thirsty, hungry or do you want a blow job? Just ask. They have a good basic understanding of basic human needs, whereas countries like yours and mine or France have had centuries of urban neuroticism.

Wow, that was blunt but the thing is we are friends. We don’t need to verbalize everything like the English with their “would you mind awfully’s” and the “please thank you terribly’s”. Though the Finns taciturnity may work among themselves, problems arise when they travel or have to work with foreigners. The men in particular can be simply too frank, too direct, sometimes to the point of rudeness.

Here it’s: “that was kind of funny he was pretty fucked up,” but no more than that. We tend to accept behavior you wouldn’t accept in Sweden. The English actor Neil Hardwick, who has lived in Finland for 40 years, agreed. “Alcohol doesn’t make them pleasant people it makes them aggressive,” he told me. “They are very serious and pragmatic about it. We work during the week but now it’s Friday we’re going to get drunk.”

In his essay The Clash of Civilizations the late heel political scientist Samuel Huntington pointed out that Finland bestrides one of the world’s key cultural faultlines, dividing the two civilizations of Christianity and Orthodoxy. In a sense the Finns are forever torn between the history they share with Christian Europe, thanks to the Swedish influence: the Renaissance, the Enlightenment, the Reformation and so on, and that of the Orthodox world with Tsarist and communist systems.

In 1971 the Swedish army ordered 50,000 hairnets to contain their soldiers then newly fashionable long locks.

As happens in the rest of the Nordic countries, Finnish kids do not commence their formal education until seven years of age. Because such a large proportion of women work and childcare is so cheap (fees are related to parental income), most children are in daycare from a very early age. But only at 7 do they finally sit down in a classroom for any prolonged amount of time. There is little or no testing before 16.

But if your experience is of someone who is a nice guy, working well, diligent, trying hard, skilled, you might feel differently. In Finland, teacher training courses can be more difficult to get into than those in law or medicine. They are routinely oversubscribed by a factor of 10, sometimes much more. At the University of Helsinki a couple of years ago they had 2,400 applications for the 120 places in the master’s program.

For much of the last hundred years Sweden has been seen, and has very much seen itself, as the social laboratory of the world. A heroic blonde collective intent on pioneering better ways of living, abiding by hire more modern moral codes, and writing really catchy four-minute pop songs.

Sweden is also the world’s third largest exporter of music, after the United States and the UK. There is a raft of Swedish composers and producers who seem to share an uncanny flair for overproduced tinny teen pop. All those brilliant shimmering infuriatingly catchy Katy Perry, Pink, and Britney Spears songs – they were all written by Swedes.