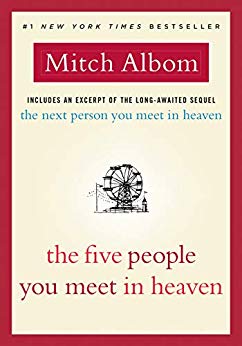 The Five People You Meet in Heaven

A parable of sorts, it makes you think a bit about how things are interconnected. I wouldn’t go as far to say it’s a philosophical text, but it’s a decent read that delightfully makes you think.

Had he known his death was imminent, he might have gone somewhere else. Instead, he did what we all do. He went about his dull routine as if all the days in the world were still to come.

“There are five people you meet in heaven,” the Blue Man suddenly said. “Each of us was in your life for a reason. You may not have known the reason at the time, and that is what heaven is for. For understanding your life on earth.”

Take one story, viewed from two different angles. It is the same day, the same moment, but one angle ends happily, at an arcade, with the little boy in tawny parts dropping pennies into the Erie Digger machine, and the other ends badly, in a city morgue, where one worker calls another worker over to marvel at the blue skin of the newest arrival.

“That there are no random acts. That we are all connected. That you can no more separate one life from another than you can separate a breeze from the wind.”

“Time,” the Captain said, “is not what you think.” He sat down next to Eddie. “Dying? Not the end of everything. We think it is. But what happens on earth is only the beginning.” Eddie looked lost. “I figure it’s like in the Bible, the Adam and Eve deal?” the Captain said. “Adam’s first night on earth? When he lays down to sleep? He thinks it’s all over, right? He doesn’t know what sleep is. His eyes are closing and he thinks he’s leaving this world, right? Only he isn’t. He wakes up the next morning and he has a fresh new world to work with, but he has something else, too. He has his yesterday.”

“That’s the thing. Sometimes when you sacrifice something precious, you’re not really losing it. You’re just passing it on to someone else.”

“People don’t die because of loyalty.” “They don’t?” She smiled. “Religion? Government? Are we not loyal to such things, sometimes to the death?” Eddie shrugged. “Better,” she said, “to be loyal to one another.”