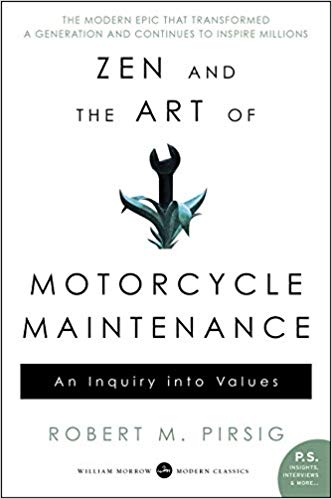 Zen and the Art of Motorcycle Maintenance

A practical philosophy text that makes you slow down and really think about stuff you normally don't. It's presented amidst a motorcycle road trip which draws a story-line through the philosophy.

John was worried Sylvia would not be up to the discomfort of this and planned to have her fly to Billings, Montana. But Sylvia and I both talked him out of it. I argue that physical discomfort is important only when the mood is wrong. Then you fasten onto whatever thing is uncomfortable and call that the cause. But if the mood is right, then physical discomfort doesn't mean much.

It's just that the structure the system demands it and no one is willing to take on the formidable task of changing the structure, just because it is meaningless. But to tear down a factory or to revolt against the government or to avoid repair of a motorcycle because it is a system is to attack effects rather than causes. And as long as the attack is upon effects only, no change is possible.

He showed how the aspect of quality called unity - the hanging-togetherness of a story - could be improved with a technique called an outline. The authority of an argument could be jacked up with a technique called footnotes, which gives authoritative reference. Outlines and footnotes are standard things taught in all freshman composition classes, but now as devices for improving quality they had a purpose. And if a student turned in a bunch of dumb references or a sloppy outline that showed he was just fulfilling an assignment by rote, he could be told that while his paper man fulfilled the letter of the assignment, it obviously didn't fulfill the goal of quality and was therefore worthless.

Applied science and technology would be drastically changed but pure science, mathematics, philosophy, and particularly logic would be unchanged. Phaedrus has found this last to be extremely interesting. The purely intellectual pursuits were the least affected by the subtraction of quality. If quality were dropped, only rationality would remain unchanged. That was odd. Why would that be? He didn't know.

What we like or don't like about that screw has nothing to do with our correct thinking. We should not evaluate what we see. We should keep our mind a blank tablet which nature fills for us and then reason disinterest oddly from the facts we observe. But when we stop and think about it disinterestedly, in terms of this stuck screw, we begin to see that this whole idea of disinterested observation is silly. Where are those facts? What are we going to observe disinterestedly? The torn slot? The immovable side cover plate? The color of the paint job? The speedometer? The sissy bar? As Poincaré would have said, "there are an infinite number of facts about the motorcycle and the right ones don't just dance up and introduce themselves. The right facts, the ones we really need, are not only passive, they are damned illusive! And we're not going to just sit back and observe them. We're going to have to be in there looking for them. We're going to be here a long time."